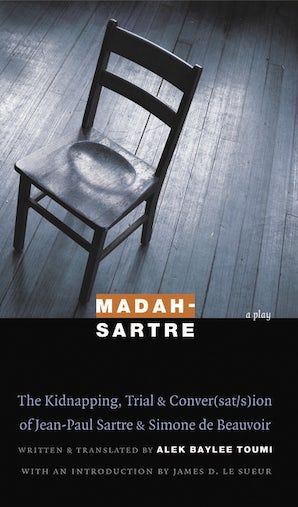 The Kidnapping, Trial, and Conver(sat/s)ion of Jean-Paul Sartre and Simone de Beauvoir

“Hell is other people,” Jean-Paul Sartre famously wrote in No Exit. The fantastic tragicomedy Madah-Sartre brings him back from the dead to confront the strange and awful truth of that statement. As the story begins, Sartre and his consort in intellect and love, Simone de Beauvoir, are on their way to the funeral of Tahar Djaout, an Algerian poet and journalist slain in 1993. En route they are kidnapped by Islamic terrorists and ordered to convert . . . or die. Since they are already dead, fearless Sartre gives the terrorists a chance to convince him with reason.
What follows is, as James D. Le Sueur writes in his introduction, “one of the most imaginative and provocative plays of our era.” Sartre, one of the greatest thinkers of the twentieth century, finds himself in an absurd yet deadly real debate with armed fanatics about terrorism, religion, intellectuals, democracy, women’s rights, and secularism, trying to bring his opponents back to their senses in an encounter as disturbing as it is compelling.

Exiled Algerian writer Alek Baylee Toumi is an associate professor of French and Francophone studies at the University of Wisconsin-Stevens Point.  He is the author of the play Albert Camus: Entre la mère et l’injustice and the book Maghreb Divers. James D. Le Sueur is an associate professor of history at the University of Nebraska-Lincoln. He is the author of Uncivil War: Intellectuals and Identity Politics during the Decolonization of Algeria, the second edition of which was published by Nebraska in 2005. 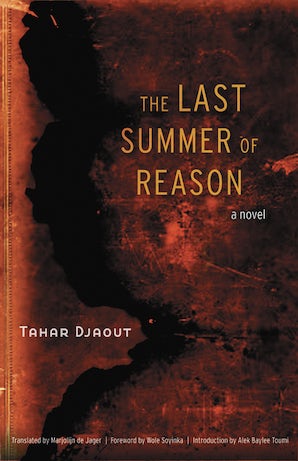 The Last Summer of Reason