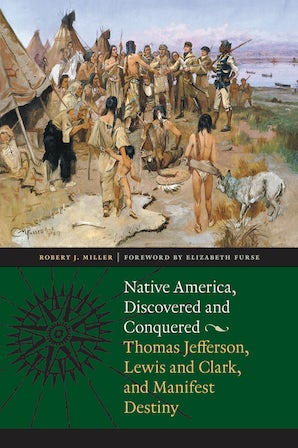 Robert J. Miller
Foreword by Elizabeth Furse
With a new afterword by the author

Native America, Discovered and Conquered takes a fresh look at American history through the lens of the Doctrine of Discovery—the legal basis that Europeans and Americans used to lay claim to the land of the indigenous peoples they “discovered.” Robert J. Miller illustrates how the American colonies used the Doctrine of Discovery against the Indian nations from 1606 forward. Thomas Jefferson used the doctrine to exert American authority in the Louisiana Territory, to win the Pacific Northwest from European rivals, and to “conquer” the Indian nations. In the broader sense, these efforts began with the Founding Fathers and with Thomas Jefferson’s Corps of Discovery, and eventually the Doctrine of Discovery became part of American law, as it still is today.
Miller shows how Manifest Destiny grew directly out of the legal elements and policies of the Doctrine of Discovery and how Native peoples, whose rights stood in the way of this destiny, were “discovered” and then “conquered.” Miller’s analysis of the principles of discovery brings a new perspective and valuable insights to the study of Jefferson, Lewis and Clark, the Louisiana Purchase, the Pacific Northwest, American expansionism, and U.S. Indian policy. This Bison Books edition includes a new afterword by the author.

Robert J. Miller is a professor at the Lewis and Clark Law School and chief justice of the Confederated Tribes of the Grand Ronde in Oregon and a citizen of the Eastern Shawnee Tribe of Oklahoma.
Elizabeth Furse is a former Oregon congresswoman and former director of the Institute for Tribal Government, Hatfield School, at Portland State University.

“To say this book is required reading for those wishing to understand American history is an understatement. Miller has provided an opportunity for readers with varying interests from Constitutional law professor to tribal advocate to public lands users of all types to gain valuable insight into the interconnected web of religion, conquest, human rights, land and equity. . . . This is an important time for this book to be published.”—Lincoln (NE) Journal Star
"Through its focus on the Doctrine of Discovery, Miller's book offers fascinating new insights into Jefferson's Indian policy, the significance of the Lewis & Clark expedition, and the origins of Manifest Destiny ideology in 19th- century America. Miller forces readers to confront the raw assertion of colonial power embodied in the Doctrine of Discovery, and its consistent deployment by the United States in the guise of law."—Carole Goldberg, author of American Indian Law
"Miller's book represents the most comprehensive and thoughtful analysis of the American version of the Doctrine of Discovery to date, its role in the voyages of Lewis & Clark, and its continuing importance in the field of federal Indian Law today."
"Professor Miller's treatment of the Doctrine of Discovery shows us that we still have much to learn about how we came to legitimize our jurisdiction over this continent. He illustrates the dense interlacing of law, ideology, and politics at work in the making of the "New World." Everyone who is interested in Indian Law and the West will have to read this book."
“Miller carefully traces the racist, greedy religiosity of Manifest Destiny . . . used to seize Indian land, especially in Oregon, showing it also as the basis for laws applied to Native Americans that appallingly continue in effect into the present. A must read.”—B. A. Mann, Choice
"This is an important book that every judge, lawyer and anyone else concerned about questions of racial justice in America should read."
"Robert J. Miller's book examines the legal history of the 'doctrine of discovery,' the Lewis and Clark expedition, and U.S. claims to the Pacific Northwest. After a short introduction that defines the doctrine of discovery, he develops his argument in three stages. First, he outlines the history of discovery as articulated in medieval and early modern Europe and in colonial America and the early national United States. Next, he focuses on Thomas Jefferson, marshalling voluminous documentary evidence to detail Jefferson's views of U.S. government authority over Indians and Indian territory; he discusses the contradiction between Jefferson's idealistic vision of Indians and his actions, which promoted aggressive acquisition of Indian lands and removal or outright extermination of Indians. Finally, the author analyzes the Lewis and Clark expedition as a manifestation of discovery and systematically describes how discovery was applied to the Oregon country between 1803 and 1855. At the end of the book, Miller briefly sketches out the subsequent application of the discovery doctrine in U.S. Indian law through 2005 and explains the ramifications of the book's findings."—American Historical Review 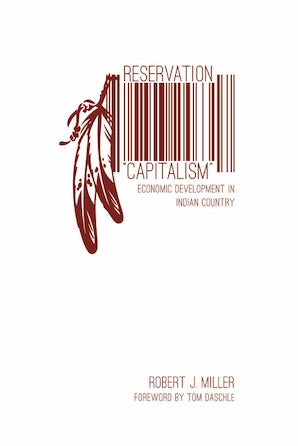