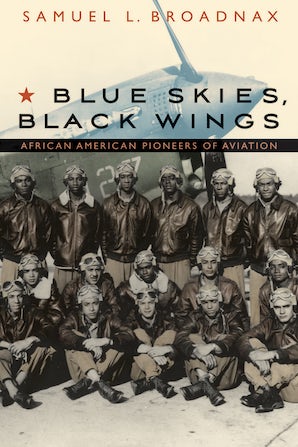 At the age of seventeen, Samuel L. Broadnax, enamored with flying, enlisted and trained as a pilot at the Tuskegee Army Air Base. Although he left the Air Corps at the end of the Second World War, his experiences inspired him to talk with other pilots and black pioneers of aviation. Blue Skies, Black Wings recounts the history of African Americans in the skies from the very beginnings of manned flight.
From Charles Wesley Peters, who flew his own plane in 1911, and Eugene Bullard, a black American pilot with the French in World War I, to the 1945 Freeman Field mutiny against segregationist policies in the Air Corps, Broadnax paints a vivid picture of the people who fought oppression to make the skies their own.

Samuel L. Broadnax graduated from Tuskegee Army Air Base with Class-45A in March 1945 as a fighter pilot. One of the celebrated Tuskegee Airmen, he was assigned to the 332nd Replacement Training Unit. He later attended Yuba College, Howard University, and the University of California, Berkeley, and has worked as a newscaster and journalist. In 2006 the Tuskegee Airmen were awarded the Congressional Gold Medal of Honor.

“Broadnax provides a long-needed book. . . . He tells what it was like to be an African American man of courage and skill in the racist south and U.S. Army of that time. . . . Broadnax paints a clear picture of how those young men earned their commissions as second lieutenants in the U.S. Army Air Force of more than six decades ago. Their story is well worth reading now. . . . Highly recommended.”—Choice
“[Broadnax’s] own love of flying is evident in his recollections of the rarefied status of flying in the early days, and his own personal struggle to garner the experience for himself despite the racial limitations of the time.”—Booklist