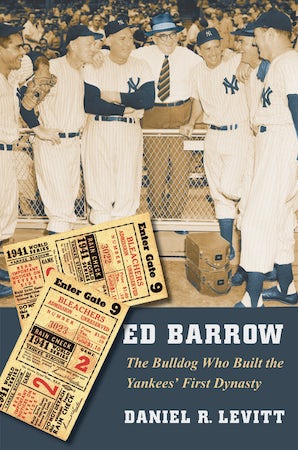 The Bulldog Who Built the Yankees' First Dynasty

Before the feuding owners turned to Ed Barrow to be general manager in 1920, the Yankees had never won a pennant. They won their first in 1921 and during Barrow’s tenure went on to win thirteen more as well as ten World Series. This biography of the incomparable Barrow is also the story of how he built the most successful sports franchise in American history.
Barrow spent fifty years in baseball. He was in the middle of virtually every major conflict and held practically every job except player. Daniel R. Levitt describes Barrow’s pre-Yankees years, when he managed Babe Ruth and the Boston Red Sox to their last World Series Championship before the “curse.” He then details how Barrow assembled a winning Yankees team both by purchasing players outright and by developing talent through a farm system.
The story of the making of the great Yankees dynasty reveals Barrow’s genius for organizing, for recognizing baseball talent, and for exploiting the existing economic environment. Because Barrow was a player in so many of baseball’s key events, his biography gives a clear and eye-opening picture of how America’s sport was played in the twentieth century, on the field and off. A complex portrait of a larger-than-life character in the annals of baseball, this book is also an inside history of how the sport’s competitive environment evolved and how the Yankees came to dominate it.

Daniel R. Levitt is the coauthor of Paths to Glory: How Great Baseball Teams Got That Way, winner of the Sporting News–SABR Baseball Research Award. He has also published numerous baseball articles and biographical essays.

http://rksbaseballbookshelf.wordpress.com/2009/03/21/prtops-to-university-of-nebraska-press/
“The author has an astounding facility with detail: The sheer number of names, dates and salaries he tosses around is mind-blowing, and the 18 informational tables in the appendix are worthy of inclusion in an economics textbook. . . . A labor of love of great value to Yankees fans and hard-core baseball junkies.”—Kirkus Reviews
“Substantive baseball history filtered through the career of one of the game’s overlooked titans.”—Wes Lukowsky, Booklist
"Levitt revisits the vexed matter of Sox owner Harry Frazee’s motives in selling baseball’s greatest player to New York and, in so doing, debunks the previous debunking of Glenn Stout and Richard A. Johnson in 2000, in Red Sox Century. . . . Eight years ago Stout and Johnson convinced me of their views; today I am just as convinced by Levitt."—Katherine A. Powers, Boston Globe
“A captivating overview of baseball from the ‘20s through the ‘40s.”—Bill Madden, New York Daily News
"[Ed Barrow] will undoubtedly go down as the definitive work on one of the most important baseball figures in the first half of the 20th century."—Rich Lederer, baseballanalytics.com
"In Ed Barrow: The Bulldog Who Built the Yankees' First Dynasty, author Daniel Levitt offers a well-detailed account of the great baseball man including his meteoric rise through the professional baseball world, the beginning of the Boston Red Sox's descent from championship status and what would become the legendary Yankee dynasty of the 1920s."—Anthony Basich, The Inside Game
"One of the many strengths of Levitt's biography is that he provides ammunition for both sides in this schism while telling the story in an even-handed and convincing manner. . . . Levitt's work is of the highest order."—Lee Lowenfish, NINE
“The University of Nebraska Press, long respected for its scholarly works, has emerged as a valuable baseball resource as well. . . . Notable American players and teams, baseball history overseas (in Latin America, Japan and Australia), sportswriters and broadcasters, the African-American baseball experience, early traces of the game’s essential elements in medieval Europe—all these and more are among the subjects examined in the NU Press’s fascinating explorations of baseball in its many dimensions. . . . . The University of Nebraska Press deserves praise for drawing attention to this notable figure—and for publishing dozens of titles that help fans of our national pastime better understand this venerable sport.”—Omaha World-Herald (NE)
“An in-depth bio of the man best known for being the power behind the great Yankee dynasty. But he was much more than that as Levitt shows in this well researched and highly readable effort.”—Frommer Sportsnet
“Baseball scholars will delight in Dan Levitt’s Ed Barrow, a meticulously detailed biography of one of the most important figures in baseball history.”—Robert Creamer, author of Babe: The Legend Comes to Life and Stengel: His Life and Times
“When we think about the beginnings of the Yankees’ long dynasty, we think of Gehrig, and DiMaggio, and the Babe. Especially the Babe. But thanks to Dan Levitt, now we know that mastermind Ed Barrow belongs on that list, too. Perhaps at the top.”—Rob Neyer, ESPN.com
“Ed Barrow was a towering figure in baseball who arrived in New York to construct the Yankee dynasty—and who left decades later, with the dynasty and his legacy well intact. Dan Levitt has captured his power within the game, his complicated relationships, and his work ethic with a wonderful look at a man who helped shape the game for half a century.”—Marty Appel, former Yankees public relations director and baseball historian
"Thousands of fans pass by Barrow's large plaque in Yankee Stadium's Monument Park annually, and though it's among the largest, he is probably the one of whom they know the least. But, as Levitt makes clear, he’s among the most important in franchise history."—Jerry Milani. Baseballdigest.com

1. "The Best Deal the Yankees Ever Made"

3. Forcing His Way into Baseball

4. A Pennant in Toronto

6. Back to the Minors

8. "Fight These Fellows to the Finish"

11. "Please Explain Why Boston Club Has Neglected to Suspend Mays"

13. Business Manager of the Yankees

22. President of the Yankees 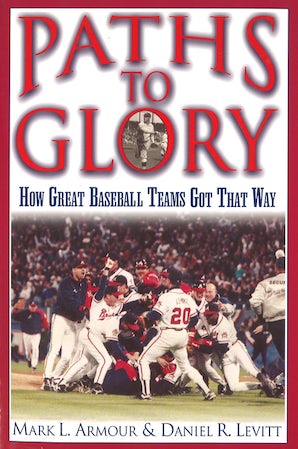