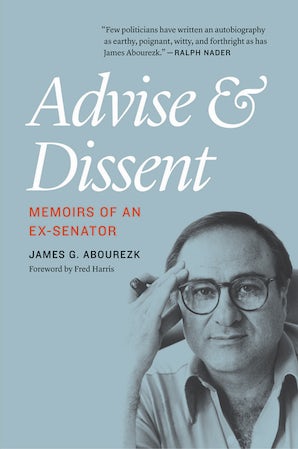 Memoirs of an Ex-Senator

James G. Abourezk
Foreword by Fred Harris
With a new epilogue by the author

Advise and Dissent is the personal odyssey of James Abourezk, from his coming of age as the son of Lebanese immigrants in South Dakota, through his hardscrabble days as a farmhand, bartender, bouncer, and cook, to his entrance into and voluntary exit from the U.S. Senate. His is a quintessentially American story that entertains as it challenges the thinking of our nation.

Abourezk refused to compromise his beliefs. He championed Native American self-determination and demanded the creation of a Palestinian state. He challenged the flow of special interest money through political action committees and tried to overthrow the structure that keeps small farmers in an economic stranglehold. His memoir takes the reader on a remarkable and wise tour through the corridors of power. At a time of waning public confidence in government, he makes us realize the importance of participatory democracy.

James G. Abourezk represented the state of South Dakota as a Democrat in the U.S. House of Representatives (1971–73) and the U.S. Senate (1973–79). He was the first Arab American to serve in the Senate and currently practices law in Sioux Falls, South Dakota. He is the coauthor of Through Different Eyes: Two Leading Americans—a Jew and an Arab—Debate U.S. Policy in the Middle East. Fred Harris is a professor of political science at the University of New Mexico and was a Democratic senator from Oklahoma from 1964 to 1973 and the thirty-second chairman of the Democratic National Committee.

“Few politicians have written an autobiography as earthy, poignant, witty, and forthright as has James Abourezk. His journey from the Indian country of South Dakota to the U.S. Senate and his struggle on behalf of the victimized, defrauded, and oppressed extend the grand populist-progressive tradition of bygone decades. Travel with Abourezk and see what happens when an irrepressible conscience interacts with the gritty world of politics and its avaricious practitioners in business and government.”—Ralph Nader

"Advise and Dissent is an important book. . . . It is an object lesson for politicians of both today and tomorrow, who believe--wrongly--that they must sell off their principles in order to be elected. Abourezk shows them how to stand for something, to be both principled and elected."--Gore Vidal
"The annals of the U.S. Senate are replete with accounts of political mavericks, and Abourezk helped lead the charge in the 1970s against the Washington establishment, the status quo, and politics as usual. . . . His brand of populist politics infuriated many, pleased others, and should be read by all, for often truth is stranger than fiction."--Library Journal
"Advise and Dissent is the inspiring success story of a Lebanese immigrant's son who went from modest circumstances to the heights of the United States Senate. Even more, it is an inspiring example of one who, repeatedly, put principle before politics, and even relinquished his seat in that great body as a matter of principle. . . . He describes his public pursuit of a private dream with so many wry and witty tales that readers will find it impossible to put this book down before it is finished, or out of mind for long after that."--Andrew I. Killgore, Washington Report on Middle East Affairs
"Not a chapter of his book is less than enthralling. His commitment to the rights of the underdog and against the machinations of monied special interest (e.g., the oil industry and PACs, which he believes should be broken up and scrapped, respectively) blazes from every page. Particularly noteworthy is Abourezk's long, indignant exposure of the perfidies of the pro-Israel lobby, which he has sought to counter by founding and working pro bono for the American-Arab Anti-Discrimination Committee. Political apologia of the first order."--Booklist

Foreword by Fred Harris
Introduction
1. "Rosebud"
2. My Life as a Sailor
3. College
4. Shoot All the Lawyers First
5. Getting Political
6. Running for the Senate
7. Advise and Dissent
8. Filibuster
9. Somebody Out There Hates Me
10. The Crazy Horse Cafe
11. My Trip to the "Evil Empire" and Other Unforgettable Junkets
12. Starting Over
13. Easy Come, Easy Go
Epilogue
Acknowledgments