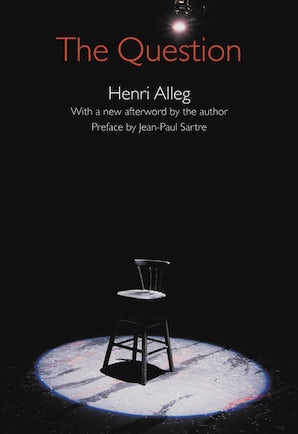 Originally published in 1958, The Question is the book that opened the torture debate in France during Algeria’s war of independence and was the first book since the eighteenth century to be banned by the French government for political reasons.

At the time of his arrest by French paratroopers during the Battle of Algiers in June of 1957, Henri Alleg was a French journalist who supported Algerian independence. He was interrogated for one month. During this imprisonment, Alleg was questioned under torture, with unbelievable brutality and sadism. The Question is Alleg's profoundly moving account of that month and of his triumph over his torturers. Jean-Paul Sartre’s preface remains a relevant commentary on the moral and political effects of torture on both the victim and perpetrator.

This Bison Books edition marks the first time since 1958 that The Question has been published in the United States. For this edition Ellen Ray provides a foreword. James D. Le Sueur offers an introduction.

Henri Alleg is a journalist living in Paris and the author of many works in French. Jean-Paul Sartre was one of the most influential writers and existentialist philosophers of the twentieth century. Ellen Ray is the coauthor, with Michael Ratner, of Guantanamo: What the World Should Know. James D. Le Sueur is an associate professor of history at the University of Nebraska–Lincoln. He is the editor of Mouloud Feraoun’s Journal, 1955–1962: Reflections on the French-Algerian War (Nebraska 2000) and the author of Uncivil War: Intellectuals and Identity Politics during the Decolonization of Algeria, Second Edition (Nebraska 2005).