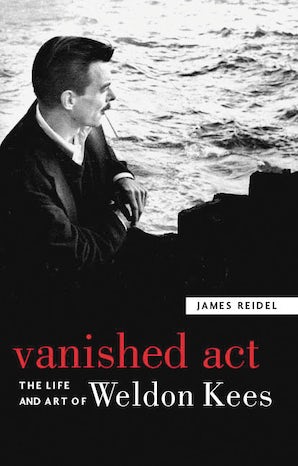 The Life and Art of Weldon Kees

Critic, novelist, filmmaker, jazz musician, painter, and, above all, poet, Weldon Kees performed, practiced, and published with the best of his generation of artists—the so-called middle generation, which included Robert Lowell, Elizabeth Bishop, and John Berryman. His dramatic disappearance (a probable suicide) at the age of forty-one, his movie-star good looks, his role in various movements of the day, and his shifting relationships with key figures in the arts have made him one of the more intriguing—and elusive—artists of the time. In this long-awaited biography, James Reidel presents the first full account of Kees’s troubled yet remarkably accomplished life.
Reidel traces Kees’s career from his birth in 1914 and boyhood in Beatrice, Nebraska, to his stint as an award-winning short-story writer and novelist, his rise as a poet and critic in New York, his branching off into abstract expressionism, jazz music, and theater, and his experimental and scientific filmmaking and photography. Going beyond the cult status that has grown up around Kees over the years, this work fairly and judiciously places him as a cultural adventurer at a particularly rich and significant moment in postwar twentieth-century America.

James Reidel is a poet and an independent scholar. He is the editor of Fall Quarter, an unpublished novel by Kees and the editor of a website on Kees.

"Reidel . . . provides an intimate view of an indecipherable poet, critic, painter, musician, and filmmaker whom some critics (e.g. Dana Gioia) have long considered woefully underappreciated. This book may help change that. . . . Reidel's invitation into Kees's life leaves the reader reaching for his poetry, hungry for clues."—Choice
"The biography of an American writer who is not nearly as famous as he ought to be. . . . Weldon Kees (1914–55?) is the 'nearly' man of 20th-century American poetry—and . . . fiction, art and music and poetry criticism, Abstract Expressionist painting, traditional jazz (both pianism and composition), avant-garde theatricals and documentary filmmaking. Until I read the poet James Reidel's biography, Vanished Act, I had not realized how 'nearly' Kees was, and how far he came, in so many fields of artistic endeavor. . . . [A] really good, well-written and thoughtful biography."—Michael Hofmann, The New York Times Book Review
"Poet, fiction writer, painter, critic, filmmaker, playwright, musician—Weldon Kees had a seemingly bottomless supply of creativity and an artistic output as diverse as anyone working in the years surrounding World War II. . . . Vanished Act, the first biography of the artist to appear . . . [is] a thorough, clear-eyed account of Kees's life."—Washington Post Book World
“Long overdue biography of an important American poet. . . . Reidel's two decades of scholarship fleshes out the details in the life of this enigmatic 20th-century writer and artist.”—Kirkus
“The story of Weldon Kees is not so much one of an achievement as it is the story of an aspiration and its afterglow. The man has a dusky, flickering allure. . . . James Reidel does not attempt to make the story any happier than it is. He frames his biography with images of ones who were left behind. . . . Reidel is right to give the book a novelist’s mood-setting touches, and he is right to have shaped the account in terms of the places where Kees lived, with long sections on Nebraska, New York, Provincetown, and San Francisco. Yet, in the end this remains a conventional biography, an attempt to step back and let the life tell itself.”—Jed Perl, Harper’s Magazine
"[We are] privy to the life, art, and anxieties of a man . . . poignantly representative of the artist's struggle to survive in wartime and post-war America. . . . Reidel has meticulously catalogued a complicated and engaging life. This book (to be followed this winter by a volume of poems and a collection of critical essays on Kees, also from University of Nebraska Press) will be of great interest to Kees's admirers and should also broaden their ranks."—Jennifer Liese, Bookforum
“Mr. Reidel uses biography as a poetic form. His mission is to re-create the experience that drew people to Kees, who enchanted women and men alike because he completely immersed himself in art and made his life into art.”—Carl Rollyson, The New York Sun
“Reidel has done a great deal with Kees’ 41 years, producing a 400 page book dedicated to the man’s known life and work. . . . His prose is clean, compelling, and reads with the ease of a novel. In doing so, it gives us another valuable history—social, aesthetic, and political—of the thirties, forties, and start of the fifties.”—Stephen Motika, Another Chicago Magazine
“Now, for the first time, a biographer has tried to unravel Kees' complicated world. [P]oet and editor James Reidel hopes to introduce a wider world to the talent and contradictions of Kees.”—Omaha World-Herald
“Vanished Act lucidly examines Kees’s heartbreaking life.”—David Caplan, The Weekly Standard