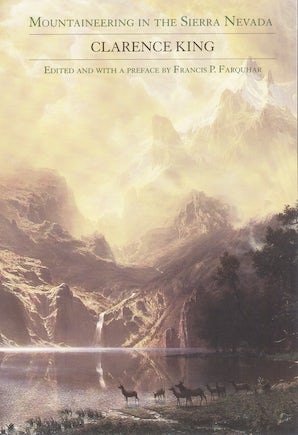 Mountaineering in the Sierra Nevada

Clarence King
Edited with a preface by Francis P. Farquhar

A bona fide classic, originally published in 1872, Mountaineering in the Sierra Nevada is still exciting reading. It describes the perils and pleasures experienced by Clarence King (1842–1901) while conducting the first geological survey of California in the 1860s. His language was equal to the marvels he found, and here with unfading brilliance are his accounts of scaling such mountains as Tyndall, Shasta, and Whitney. The chapters on the Yosemite Valley and surrounding High Sierras were written while he was surveying the boundaries of a newly designated national park. There are also delightful vignettes of western characters, including a Sierra artist and a family of Pike County hog farmers.

Clarence King, who in 1879 became the first director of the United States Geological Survey, will always be remembered for Mountaineering in the Sierra Nevada, which was praised by Wallace Stegner, Van Wyck Brooks, and Henry Seidel Canby as a watermark of frontier literature.This 1935 edition was introduced and edited by Francis P. Farquhar, editor of the Sierra Club Bulletin from 1926 to 1946.