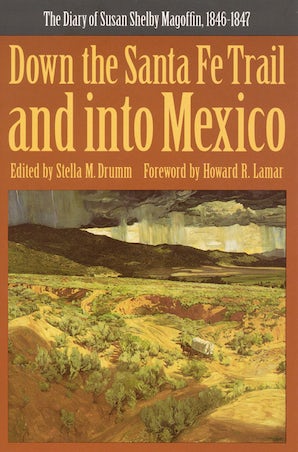 Down the Santa Fe Trail and into Mexico

In June 1846 Susan Shelby Magoffin, eighteen years old and a bride of less than eight months, set out with her husband, a veteran Santa Fe trader, on a trek from Independence, Missouri, through New Mexico and south to Chihuahua. Her travel journal was written at a crucial time, when the Mexican War was beginning and New Mexico was occupied by Stephen Watts Kearny and the Army of the West.

Her journal describes the excitement, routine, and dangers of a successful merchant's wife. On the trail for fifteen months, moving from house to house and town to town, she became adept in Spanish and the lingo of traders, and wrote down in detail the customs and appearances of places she went. She gave birth to her first child during the journey and admitted, "This thing of marrying is not what it is cracked up to be."

Valuable as a social and historical record of her encounters—she met Zachary Taylor and was agreeably disappointed to find him disheveled but kindly—her journal is equally important as a chronicle of her growing intelligence, experience, and strength, her lost illusions and her coming to terms with herself.

"One of the finest journals by women in 19th century America, Susan Magoffin's book not only gives us a sparkling account of the beauties of the Southwest and its history, but also signals a distinct change in American perception of Mexicans, whom she learned to admire and respect, even in a time of hostility and war."—Sandra Myres, editor, Ho for California: Women's Overland Diaries from the Huntington Library