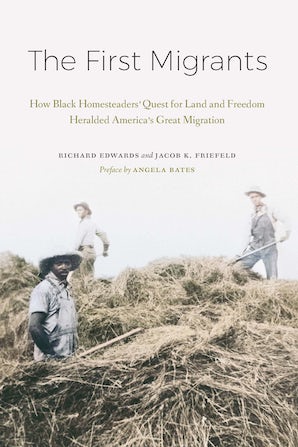 The First Migrants recounts the largely unknown story of Black people who migrated from the South to the Great Plains between 1877 and 1920 in search of land and freedom. They exercised their rights under the Homestead Act to gain title to 650,000 acres, settling in all of the Great Plains states. Some created Black homesteader communities such as Nicodemus, Kansas, and DeWitty, Nebraska, while others, including George Washington Carver and Oscar Micheaux, homesteaded alone. All sought a place where they could rise by their own talents and toil, unencumbered by Black codes, repression, and violence. In the words of one Nicodemus descendant, they found “a place they could experience real freedom,” though in a racist society that freedom could never be complete. Their quest foreshadowed the epic movement of Black people out of the South known as the Great Migration.

In this first account of the full scope of Black homesteading in the Great Plains, Richard Edwards and Jacob K. Friefeld weave together two distinct strands: the narrative histories of the six most important Black homesteader communities and several themes that characterize homesteaders’ shared experiences. Using homestead records, diaries and letters, interviews with homesteaders’ descendants, and other sources, Edwards and Friefeld illuminate the homesteaders’ fierce determination to find freedom—and their greatest achievements and struggles for full equality.

Richard Edwards is director emeritus of the Center for Great Plains Studies at the University of Nebraska–Lincoln. He is the author or coauthor of numerous books, including Homesteading the Plains: Toward a New History (Nebraska, 2017) and Natives of a Dry Place: Stories of Dakota before the Oil Boom. Jacob K. Friefeld is a historian at the Abraham Lincoln Presidential Library and Museum in Springfield, Illinois. He is coauthor of Homesteading the Plains: Toward a New History (Nebraska, 2017). Angela Bates is the executive director of the Nicodemus Historical Society and a descendant of the original homesteaders of Nicodemus. She has served on the Kansas Historical Foundation board of directors and is a member of the National Trust for Historic Preservation.

“Western expansion of the United States is often portrayed as an endeavor undertaken by primarily European pioneers. The contribution of African Americans, especially formerly enslaved people, is little known or discussed. The First Migrants heralds the contributions of people frequently marginalized in American history. This story of the African American homesteaders who helped settle America’s Great Plains is informative, comprehensive, and very personal. It shouts, ‘We were there.’”—Catherine Meehan Blount, granddaughter of DeWitty homesteaders
“This amazingly researched work will make a meaningful and needed contribution to African American history, as well as to our understanding of how non-Indigenous Americans, Black and white, settled the Great Plains. Its revelation of the multiracial aspect of homesteading on the plains, moreover, will make a most important addition to the general body of American post–Civil War history.”—Kenneth M. Hamilton, author of Booker T. Washington in American Memory

“African Americans have been absent in the annals of Western history. Their history is rich and diverse, and speaks to their tenacity, strength, and determination. Their lives are written in the soils of the Great Plains. The winds that sweep its prairies no longer silence their voices. . . . As a descendant of Nicodemus’s first settlers, I am honored to be a part of this still-unfolding story.”—Angela Bates, executive director of the Nicodemus Historical Society
“Finally, a spotlight shines on Black homesteaders in the Great Plains and in the West. Finally, these courageous Americans are remembered and honored. Meticulously researched and beautifully written, [this] exceptional book is a deeply moving, sensitive portrait of individuals and communities that shaped the country and decades of descendants. Impossible to put down, The First Migrants achieves what few books do: it enriches and changes the conversation about the American experience.”—Ann Weisgarber, author of The Personal History of Rachel DuPree

“The First Migrants illustrates an epic event in our nation’s history that is often missed, overlooked, or misunderstood—the story of our nation’s Black homesteaders. Through personal, gripping stories illustrated in this book we learn that ‘Black homesteading was not just a curious historical phenomenon, over and now done with, but rather a historical process that continues to have impact and importance’ on our nation and the world. The First Migrants reveals the path these American citizens traveled, from being ‘owned to owning,’ and through this journey achieving the American dream.”—Mark Engler, former superintendent of Homestead National Historical Park