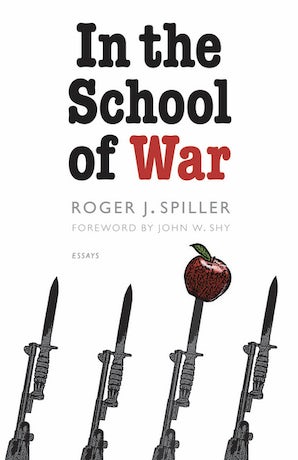 In the School of War

Fort Leavenworth, where Roger J. Spiller taught the army’s finest for twenty-five years, is indeed a “school of war.” There, among military professionals who had experienced war firsthand, Spiller honed his remarkable skills as an analyst and historian, scholar and teacher—skills that have made him one of the best-known and respected military historians of our day. This volume brings together Spiller’s original and thought-provoking explorations of wars big and small and armies glorified and ignored. For each of these essays—whether on urban warfare or the Vietnam syndrome, battlefield psychology or the making of military history, and underrated vs. overrated generals—Spiller revisits his topic and his thinking, bringing fresh insight and a new context to an incomparable body of work. In the School of War further reveals the complex relationship between past and present in an understanding of the nature of war.

Roger J. Spiller is the George C. Marshall Distinguished Professor of Military History (retired) at the U.S. Army Command and General Staff College in Fort Leavenworth, Kansas. He is the author or editor of numerous publications, including his latest work, An Instinct for War: Scenes from the Battlefields of History. Most recently, he was an advisor for Ken Burns’s PBS documentary, The War. John W. Shy, professor emeritus of history at the University of Michigan, is the author of A People Numerous and Armed: Reflections on the Military Struggle for American Independence.

“Military historians with imaginative, skeptical minds are an invaluable asset, and Roger Spiller has such a mind, as these essays reveal. I am truly grateful that military history contains a few bright practitioners, like Roger Spiller, who provoke us to think anew.”—John W. Shy, professor emeritus of history, University of Michigan
“Roger Spiller has always maintained that his degree reads doctor of philosophy, not history. He has behaved accordingly, thinking and researching beyond disciplinary limits as he taught and mentored generations of mid-grade officers and their seniors, mostly at Fort Leavenworth, Kansas. This collection of essays demonstrates most of all the play of intellect of a late twentieth-century humanist who demonstrates daily that living the life of the mind depends more on the mind than the location.”—Richard M. Swain, Colonel, U.S. Army, retired, author of Lucky War: Third Army in Desert Storm
“Roger Spiller is an unconventional, varied, and remarkably sensitive historian. In these essays his qualities are exhibited to fine effect. He writes in bright colours, with vivid allusions and anecdotes drawn from his extraordinarily diverse stock of knowledge of the world’s military cultures. But more than anything else, all readers will learn something from reading his book, for Spiller is an acute and judicious military critic. In short, to paraphrase the Duke of Marlborough, time spent reading these elegant and humane essays will not be wasted.”—Brian Holden Reid, King’s College London, author of America’s Civil War: The Operational Battlefield, 1861–63
"In the School of War is a superbly crafted, thought-provoking, and entertaining collection of essays that addresses the nature of warfare, illustrates the uses and applications of military history, and chronicles the author's own intellectual journey as a military historian at the U.S. Army Command and General Staff College, Fort Leavenworth, Kansas."—MAJ Kevin D. Stringer, Military Review
"In the School of War offers a fine selection of Roger Spiller's insightful essays."—Roger D. Cunningham, Journal of America’s Military Past