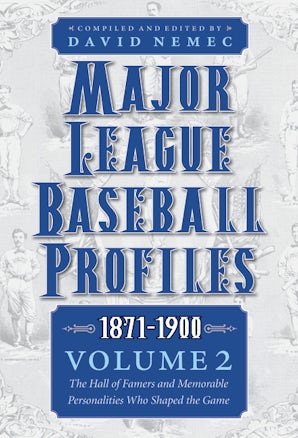 The Hall of Famers and Memorable Personalities Who Shaped the Game

In its infancy, major league baseball was anyone’s game, open to a dizzying array of rogues and scamps, athletic giants and captains of industry, hustlers, managers, and umpires who transformed club-based teams into the first professional federations with formalized rules—and commercial considerations. This two-volume work—with its profiles of every key contributor to the major league game from May 4, 1871, through December 31, 1900—is truly “inside baseball.”
Volume 2 features Hall of Famers who played in the era, as well as twenty other figures who aren’t yet enshrined but arguably should be because of their considerable impact on the game. It also profiles early day baseball’s crooks, madcaps, homicide victims, suicides, and missing persons, in addition to the managers, team owners, and umpires who helped give the game its structure and shape.
More than a collection of mere facts and statistics, Major League Baseball Profiles provides a unique history of the evolution of major league baseball, from the date of the first major league game in 1871 through the 1900 season, which marked not only the close of a century but also the unofficial end of what many believe to be the formative period of the game.

“David Nemec belongs in the Hall of Fame of early baseball research. Here, he uses a wealth of fascinating details to breathe life back into many little-known nineteenth-century ballplayers whose exploits and, at times, sheer grit are well worth remembering and celebrating.”—Edward Achorn, author of Fifty-Nine in ’84: Old Hoss Radbourn, Barehanded Baseball, and the Greatest Season a Pitcher Ever Had

“Whether you are a newcomer to the wonderful world of nineteenth-century baseball or consider yourself to be an expert, you will learn much in this wonderful collection of biographical sketches. While other books have focused on the great pennant races or teams of the era, no book has so vividly presented the colorful stories of so many players as these two volumes do. You will be entertained and you will be smarter, once you spend some time with these books.”—Mark Armour, chairman of SABR’s Baseball Biography Project and author of Joe Cronin: A Life in Baseball

"Nemec's books are wonderful . . . . I can see this book becoming as invaluable a resource to me as The Baseball Encyclopedia—something that will entertain and inform me for the rest of my life."—Pete Croatto, Biblio Buffet
"Major League Baseball Profiles provides a fascinating and unique view of the scores of individuals who played a role in laying the foundation for the modern game. It is an indispensible resource for anyone wishing to gain a better understanding of the formative years of big-league baseball."—Jim Frutchey, Booklist

"Nemec and his team of writers/researchers have created a two-volume extravaganza of nineteenth century baseball biography that will be the definitive work for the foreseeable future and beyond."—Big Bad Baseball 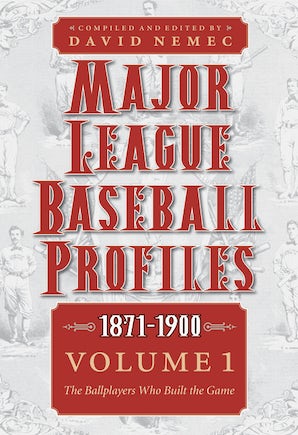 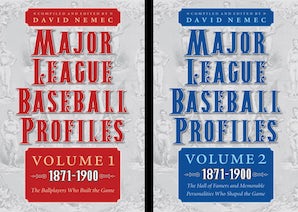 Compiled and edited by David Nemec