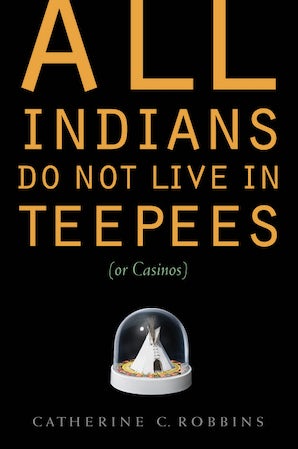 All Indians Do Not Live in Teepees (or Casinos)

Both a tribute to the unique experiences of individual Native Americans and a celebration of the values that draw American Indians together, All Indians Do Not Live in Teepees (or Casinos) explores contemporary Native life.
Based on personal experience and grounded in journalism, this story begins with the repatriation of ancestral remains to the Pueblo peoples of New Mexico. The 1999 return to Pecos of the skeletal remains of two thousand bodies excavated during an archaeological expedition nearly a century earlier was the largest repatriation in American history. In a united, purposeful, and energizing quest, the Pecos and Jemez Indians brought their ancestors home. This event, along with subsequent repatriations, has accelerated similar momentum across much of Native America.
In All Indians Do Not Live in Teepees (or Casinos), Catherine C. Robbins traces this restorative effect in areas such as economic development, urbanization, the arts, science, and health care. Through dozens of interviews, Robbins draws out the voices of Indian people, some well-known and many at the grassroots level, working quietly to advance their communities. These voices speak against the background of the narrative’s historical context. The result is a rich account of Native American life in contemporary America, revealing not a monolithic “Indian” experience of teepees or casinos, but rather a mosaic of diverse peoples existing on a continuum that marks both their distinctions and their shared realities.

Catherine C. Robbins has spent twenty-five years as an independent journalist and writer, and her stories about American Indians have appeared in numerous publications including the New York Times.

"Journalist Robbins, through interviews and up-to-date historical context, reminds readers of the complexity of Native American life in contemporary America."—Margaret Heilbrun, Library Journal
"A solid, insightful overview of the way American Indians live now."—Kirkus
"Journalist Robbins creates a collage of the prospects and problems faced by Native Americans in this sharp, readable blend of history, cultural commentary, and advocacy. . . . As an illustration of modern Native American life, it effortlessly depicts politics, culture, and pride; as a first book it is a marvel."—Publishers Weekly
"Sharply focused and rich in detail."—Robert Woltman, Albuquerque Journal
"Robbins's ability to take the all-encompassing term Indian, once used to stereotype a myriad of peoples, and show it not as a limiting factor but as describing a larger brotherhood, is inspiring. The capacity of artists and journalists from various tribes to form alliances and bring the Indian voice to the non-Indian public is a monumental step forward in understanding today’s Indian country."—Melvin Jordan, Indian Country Today
"No single book can do more than scratch the surface of the complex contemporary lives of Native peoples. But Robbins has helpfully provided nearly 60 pages of detailed notes, along with useful lists of books, places and websites—a plethora of resources readily available to anyone willing to look beyond the popular culture's stereotypes of American Indians." Chérie Newman, High Country News

List of Illustrations
Preface: For the Reader
Introduction: Flying Together
1. The Unconquerables
2. Thoughts from the Chief
3. An Encampment
4. The Way We Should
5. Where Hatred Was Born
6. The Drum
7. Buckskin Boxes, Galactic Explosion
Disclosures: We Help Each Other
Acknowledgments
Notes
Bibliographic Essay
Index