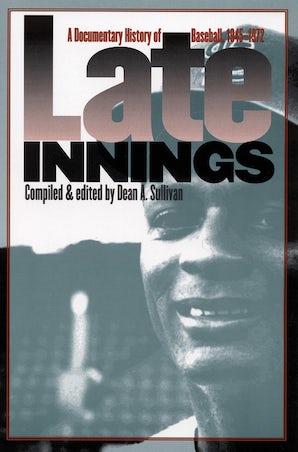 Late Innings: A Documentary History of Baseball, 1945–1972 is the third volume in Dean A. Sullivan's successful series on the vibrant history of baseball. Through 114 contemporary documents, Late Innings examines everything from Jackie Robinson's ground-breaking assault on the color barrier to Roger Maris's run on the home run record to the first stirrings of labor-management unrest in the 1970s. Late Innings also looks at exciting on-field activities, the antitrust controversy, issues of expansion, the effect of television on the game, and several other points of interest swirling around baseball in postwar America.

"Sullivan's selection is intelligent and significant, and it chronicles the major engines of change in baseball in the face of financial, geographic, and cultural upheaval. The three volumes together present a very useful basic documentary history of the national pastime."—Choice
"Spanning the era from the close of World War II to the 1972 U.S. Supreme Court ruling rejecting Curt Flood's bid for free agency, this book presents a documentary examination of major league baseball. The materials include official pronouncements by baseball's own high court, sharp accounts of ball games and pennant races, and references to some of the finest histories of the sport."—Library Journal
"Throughout, he prefers to let the collected sources tell baseball's history for him—an effective strategy for a sport that inspired much of the century's best journalism. Though a bit specialized for general readers, a goldmine for students and fans of baseball history, as well as readers with interests in mid-20th-century race and labor issues."—Kirkus Reviews
“There is much to like in this volume, from the emergence of improved statistical analysis by Seymore Siwoff and his Elias Sports Bureau to the ill-fated idea of playing two All-Star Games per season to the charmed existence that the sport of baseball has enjoyed with the U.S. Supreme Court. This volume is a must for any person who is a student of baseball history.”—Bill Kirwin, Nine
"Sullivan, editor of Early Innings, which cover 1825-1900 and 1900-1948 respectively, does a fine job of gathering representative pieces that show baseball as a work in progress, ever-growing, ever-changing."—bookreporter.com 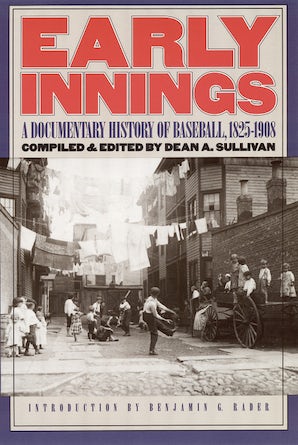 Compiled and edited by Dean A. Sullivan
Introduction by Benjamin G. Rader 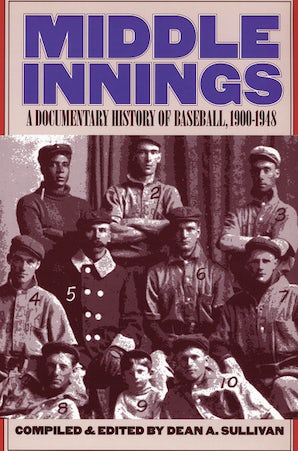 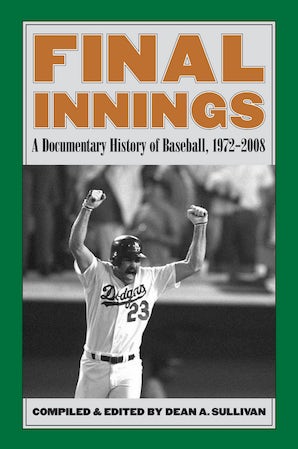