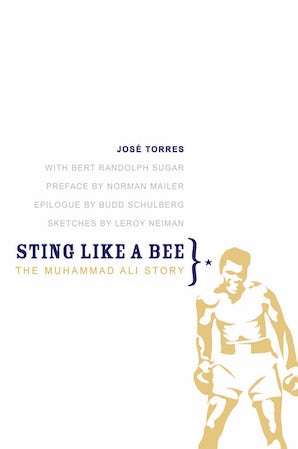 Writers have long been attracted to boxing. Hemingway, Mailer, Algren, Plimpton, Oates, and many others have stepped into the ring—at least in spirit—to give voice to an otherwise wordless sport, to celebrate that “sweet science,” and to bear witness to its romance and tragedy. In this acclaimed book, hailed by Norman Mailer as an “impressive event,” we are brought for the first time into the ring for a close-up look at the “manly art” through the eyes of José Torres, a man who was a great boxer himself. When former light-heavyweight world champion Torres traded in his gloves for a typewriter, boxing finally found its eyewitness.
In the classic Sting Like a Bee, Torres turns his well-trained eye on one of the most celebrated and controversial athletes of all time: Muhammad Ali. In this penetrating view of Ali and the world of prizefighting, told by a true insider and “boxing’s Renaissance man,” Torres delivers exciting and explicit accounts of all of Ali’s major fights with the cool authenticity of one who has lived it.

José Torres is a former boxer who won a silver medal in the 1956 Olympic Games and the 1958 New York Golden Gloves Open Championship. He is the author of Fire and Fear: The Inside Story of Mike Tyson and a regular contributor to the Spanish-language New York newspaper El Diario La Prensa.
Bert Randolph Sugar is a historian, boxing writer, Boxing Hall of Famer, and the former editor of Boxing Illustrated and The Ring. He is the author of several boxing books, including My View from the Corner and Boxing's Greatest Fighters.

“Acrid, penetrating, a book fuming with the ammonia of the prize ring and the psychic steam of champions.”—Publishers Weekly
“Marvelous. . . . It is a study of the psychic contest that in boxing is the hidden part of the iceberg.”—New York Times
"With his keen, analytical eye, [José Torres] takes us inside the gym, inside the locker room, and even inside the psyche of the boxer in the ring. He explains the feelings, including fear and exhaustion, that all boxers, even Ali, experience prior to, during and after a fight. This makes Sting Like a Bee more than a valuable insight into a significant period in the career of a boxing legend. It is also a benchmark against which to measure other boxing books, if not sports literature in general."—Tim Gebhart, Blogcritics.org