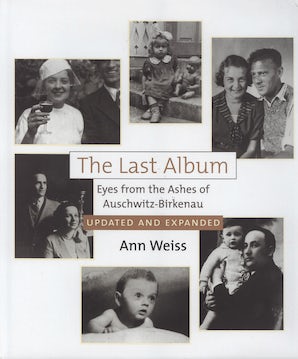 Eyes from the Ashes of Auschwitz-Birkenau

$44.95 Add to Cart
"A 'must' for any serious Jewish history collection—and many a general interest holding, as well."—Bookwatch
about author bio praise table of contents media awards

In October of 1986, Ann Weiss entered a locked room at Auschwitz and came across an archive of over 2,400 photographs brought to the death camp by Jewish deportees from across Europe during the Holocaust. The photos, both candid snapshots and studied portraits, had been confiscated, but instead of being destroyed they were hidden at great risk and saved. In many cases these pictures are the only remnants left of entire families.

In this revised edition of The Last Album there are over 400 of these remarkable photographs. The collection traces the story of how they arrived at Auschwitz-Birkenau and how the author came to see them through what was essentially a fortuitous accident. In the years that followed, Weiss identified as many people and places in the photos as possible, traveling around the world to track down remaining family members and friends, and listening to stories of the inmates' lives before they were removed to the camp. Many of these accounts are transcribed here.

Although the photographs in this book were found at a death camp, they are bursting with life. We see babies; parents with their children; groups of teenagers; people at work, at school, at home, on vacation—normal people leading normal lives.

The photographs and reminiscences gathered here offer a rare and intensely personal view of who these individuals were and, most importantly, how they chose to remember themselves.

Ann Weiss is the author of The Last Album, a collection of personal photographs found at Auschwitz. Her speech topics include “Eyes from the Ashes of Auschwitz-Birkenau.”

"A 'must' for any serious Jewish history collection—and many a general interest holding, as well."—Bookwatch