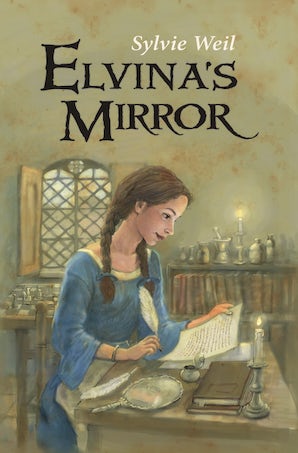 The tale of Rashi’s granddaughter, a young girl who defies her community to help a friend in need. In this sequel to My Guardian Angel, Sylvie Weil continues the story of Elvina, the 14-year-old granddaughter of Rashi, the famous eleventh-century French Bible and Talmud commentator. It is the spring of 1097 in the town of Troyes, in France. The Crusaders have been marauding their way through Europe, attacking Jewish communities. One evening, a mysterious family arrives in Troyes—German Jews forced by the Crusaders to submit to baptism.

The townspeople shun the family, but Elvina befriends eleven-year-old Columba. Columba’s mad cousin, Ephraim, steals a mirror from a member of the Jewish community, believing it will let him see his family killed in the recent attacks. Elvina tries to help Ephraim rid his mind of the terrible images by bringing him her own mirror, in which she claims to see a positive future. Elvina’s story brings the world of Medieval European Jewry to life for young readers.

Sylvie Weil was raised in Paris and earned her degrees in classics and French literature at the Sorbonne. She has taught French literature at Barnard, Bennington, and Hunter colleges, and the Graduate Center of the City University of New York. She is the author of several works of adult fiction and the Elvina trilogy, a series of French novels for young adults. The first book in the trilogy, le Mazal d’Elvina, (My Guardian Angel), won the Prix Sorcieres, a prestigious French prize awarded for the best novel for young readers.

“With a varied cast of characters and an action-packed plot, Elvina’s Mirror will keep the young reader's interest from beginning to end.”—AJL Newsletter