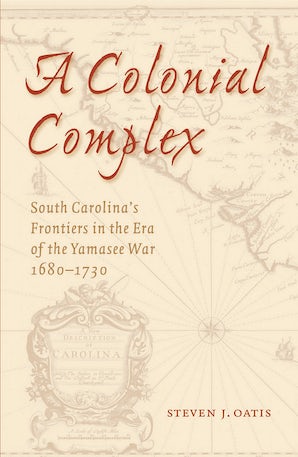 In 1715 the upstart British colony of South Carolina was nearly destroyed in an unexpected conflict with many of its Indian neighbors, most notably the Yamasees, a group whose sovereignty had become increasingly threatened. The South Carolina militia retaliated repeatedly until, by 1717, the Yamasees were nearly annihilated, and their survivors fled to Spanish Florida. The war not only sent shock waves throughout South Carolina's government, economy, and society, but also had a profound impact on colonial and Indian cultures from the Atlantic Coast to the Mississippi River.

Drawing on a diverse range of colonial records, A Colonial Complex builds on recent developments in frontier history and depicts the Yamasee War as part of a colonial complex: a broad pattern of exchange that linked the Southeast’s Indian, African, and European cultures throughout the late seventeenth and early eighteenth centuries. In the first detailed study of this crucial conflict, Steven J. Oatis shows the effects of South Carolina’s aggressive imperial expansion on the issues of frontier trade, combat, and diplomacy, viewing them not only from the perspective of English South Carolinians but also from that of the societies that dealt with the South Carolinians both directly and indirectly. Readers will find new information on the deerskin trade, the Indian slave trade, imperial rivalry, frontier military strategy, and the major transformations in the cultural landscape of the early colonial Southeast.

Steven J. Oatis is an assistant professor of history at the University of the Ozarks.

"Steven J. Oatis's book is the most important contribution to our understanding of the Yamasee War since Verner Crane's magisterial The Southern Frontier. . . . first published in 1928. . . . Oatis makes it abundantly clear that whatever the causes of the Yamasee War, it powerfully reordered the political landscape of the lower South for a very long time to come."—Charles Hudson, American Historical Review
“This well-written volume will appeal to scholars of the American frontier and the early American South. It effectively draws upon a wide range of English and Spanish sources to provide by far the most detailed account of the war and the events that surrounded it, and readers will appreciate its insights.”—Andrew K. Frank, Itinerario
"A welcome addition to the growing body of literature addressing the early colonial period in the American southwest."—William Wall, Journal of Military History
"With the publication of Steven J. Oatis's excellent book, we finally have a comprehensive and persuasive interpretation of this critical war."—Journal of Southern History
“Oatis allows the reader to appreciate the 'kaleidoscopic complexity' of the eighteenth-century southern frontier with its 'fluid identities and ambiguous alliances'. . . . Oatis has produced a work that is a must read for serious students of South Carolina’s early history.”—Mary Ferrari, South Carolina Historical Magazine
"A Colonial Complex is noteworthy because Oatis provides an insightful look into a conflict that is usually only mentioned as a side note in the history of the Creek Indians. But Oatis's research goes well beyond the Yamasee War, and as a result anyone studying colonial interaction with Indians in the Southeast will find this book useful."—Michael Hoekstra, Southern Historian
A Colonial Complex: South Carolina's Frontiers in the Era of the Yamasee War, 1680-1730. By Steven J. Oatis. Lincoln: University of Nebraska Press, 2004. Pp. xii, 399. Map. Notes. Bibliography. Index. $65.00 cloth.
This important book reexamines the English and Indian Southeast during the crucial half century from 1680 to 1730, a period dominated by the Yamasee War (1715-1717). This was a conflict with a white mortality rate nearly double that of King Philip's War, and "engulfed not just a colony but an entire region . . . [with] three imperial powers and dozens of different Indian societies" (p. 305).

In an intelligent discussion of frontier historiography, Oatis argues that the New Western History, which rejects Frederick Jackson Turner's frontier thesis to emphasize a methodology of "region-making," is too extreme in its dismissal of frontier processes as a transitional state on the way to a mature society. While recognizing regionalist Alan Gallay's study of The Indian Slave Trade (2002) as "the first comprehensive study of the Southeast in the late seventeenth and early eighteenth centuries since Crane's Southern Frontier" (p. 5), Oatis is more attuned to the New Indian History, which has redefined the term "frontier" and brought into focus the dynamics of cultural interaction in a region of multiple societies, none exercising a monopoly of violence. Jack Forbes's concept of a "frontier complex" seems to make the best of both new methodologies.

Most modern historians put the blame for the Yamasee War on the abusive practices of the Indian traders. This is the reason that the proprietors chose to emphasize, although Oatis is attentive to other causes, such as: the Yamasees' declining numbers; the encroachment of white men onto the Port Royal reservation, threatening ten villages; the diminishing supplies of deer for the deerskin trade and of Florida mission Indians for the slave trade; and the Yamasees' growing conviction that the census-taking, fort-constructing, captive-buying government of South Carolina, which had already used the Shawnees to destroy the Westos, had ulterior designs on them. Apalachicolas on the Savannah River and Ocheses on the Ocmulgee River agreed that something must be done, but it was the Yamasees who dealt the first blow, attacking an embassy of South Carolinians at the head town of Pocotaligo, and then sending two war parties against nearby white settlements. As the conflagration spread, neither whites nor Indians presented a united front. While the Catawbas eventually sided with the Yamasees, the Cherokees came to the relief of South Carolina with more men than either Virginia and North Carolina elected to provide. Receiving the first reports of violence, South Carolinians imagined that the Spanish or French were behind it, but the war caught officials in St. Augustine, Pensacola, and Mobile by surprise, and they were clearly unprepared to deal with the fallout of Yamasee refugees at their gates and western Muskogeans at their trading posts, who appeared unannounced to trade their deerskins for guns and rum.

The Yamasee War remade the Southeast's settlement patterns, as native groups abandoned the coast between the Altamaha and Savannah rivers to rebuild their towns, with ditches and palisades, in safer river valleys. The war also furthered the process of ethnogenesis, as fragmented groups combined into new confederacies. Moreover, it checked South Carolina's "imperial offensive" long enough to allow the French to build Fort Toulouse in what would become Alabama, the Spanish to rebuild Fort San Marcos in the crook of Florida, and a new group of British colonists to settle Georgia. And, the author argues, the sheer unexpectedness of the attacks left the South Carolinians with a deep fear of slave insurrections.

Oatis's writing skills, powers of analysis, and command of the South Carolina materials are impressive, but A Colonial Complex tills a fenced field, advancing our knowledge of Southeastern history and ethnohistory to the edge of only one set of sources. The sections on Florida, a colony with its own history of Yamasee settlements, raids, and refugees, are weak; and while the author makes a conscious effort to interpret the behavior of the Yamasees and their allies from an Indian point of view, his stance toward the Spanish and their native allies shows that, even in this fine study, the old divides endure. The Southeast's archives—English, Spanish, and French—hold the scripts of three concurrent dramas, and for the Indian players, an exit from one stage was often an entrance onto another. The first historian to consult all the available documents will be the first to write a history that is truly Indian-centered, instead of yet another history of a subset of white men.