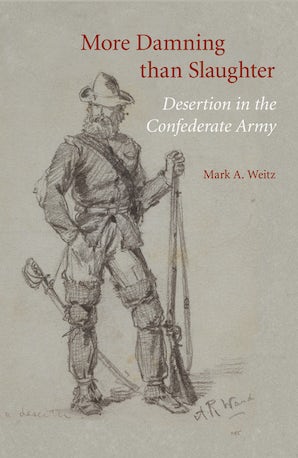 Desertion in the Confederate Army

More Damning than Slaughter is the first broad study of desertion in the Confederate army. Incorporating extensive archival research with a synthesis of other secondary material, Mark A. Weitz confronts a question never fully addressed until now: did desertion hurt the Confederacy?
Coupled with problems such as speculation, food and clothing shortages, conscription, taxation, and a pervasive focus on the protection of local interests, desertion started as a military problem and spilled over into the civilian world. Fostered by a military culture that treated absenteeism leniently early in the war, desertion steadily increased and by 1863 reached epidemic proportions. A Union policy that permitted Confederate deserters to swear allegiance to the Union and then return home encouraged desertion. Equally important in persuading men to desert was the direct appeal from loved ones on the home front—letters from wives begging soldiers to come home for harvests, births, and other events.
By 1864 deserter bands infested some portion of every Confederate state. Preying on the civilian population, many of these bands became irregular military units that frustrated virtually every effort to subdue them. Ultimately, desertion not only depleted the Confederate army but also threatened “home” and undermined civilian morale. By examining desertion, Weitz assesses how deteriorating southern civilian morale and growing unwillingness to contribute goods and services to the war led to defeat.

Mark A. Weitz is the former director of the Civil War Era Studies Program at Gettysburg College. He is the author of A Higher Duty: Desertion among Georgia Troops during the American Civil War (Nebraska 2005).

“Mark A. Weitz’s study . . . aims to fill in one of the last remaining gaps in Civil War historiography.”—Publishers Weekly
"The author observes that desertion remains one of the least studied, and least understood, aspects of the war, a matter at least partially the result of the demands of the ‘Lost Cause’ school of Confederate historiography."—New York Military Affairs Symposium
“An impressive piece of scholarship. . . An excellent, thought-provoking study of an overlooked aspect of the Civil War.”—Civil War Book Review
“[This book] is the first attempt in decades to treat desertion in the entire South and the entire war, and it does so masterfully, despite the lost records that are the curse of any serious researcher. Mark Weitz has provided an important study of a neglected topic. His research is extensive and thorough, and his writing is clear. The combination is a well done work of history that should appeal not only to students of desertion but to anyone interested in learning more about topics beyond the battles of the Civil War and the Southern myth of the noble but lost cause.”—John H. Barnhill, Chronicles of Oklahoma
“Weitz presented his case convincingly and forcefully. . . . [He] has contributed significantly to our understanding of Confederate desertion and the way it became inextricably tied to the South’s ultimate defeat.”—Journal of American History
“Like prisoners of war, who have received little scholarly attention until recently, deserters have not been the subject of a general study since Ella Lonn’s 1928 work. This comprehensive treatment supersedes that landmark for Rebels. Dense and crowded with details, Weitz proceeds in chronological fashion, employing a disease analogy to follow the spread of desertion through all parts of the South, devoting equal attention to the eastern and western theaters, and using data not available to Lonn.”—Michael B. Chesson, Military History of the West
“A fascinating read. . . . Mark Weitz has written an important book that adds to our understanding of soldier desertion, Confederate nationalism, and defeat.”—Lesley J. Gordon, Georgia Historical Quarterly
"A pioneering study. . . . Bound to be the standard on the subject."—Brian Holden Reid, Civil War History
“Weitz must be commended for his bold attempt to tell such an important story. Hopefully, his work here will drive other scholars to revisit desertion as a topic of study and, in time, a collection of literature befitting such an important aspect of the Confederate war effort will emerge.”—Peter S. Carmichael, H-Net Book Reviews