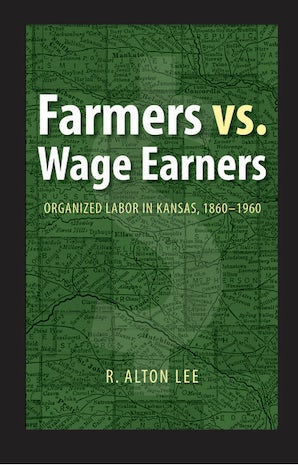 While predominantly agrarian, Kansas has a surprisingly rich heritage of labor history and played an active role in the major labor strife of the late nineteenth and early twentieth centuries. Farmers vs. Wage Earners is a survey of the organized labor movement in the Sunflower State, which reflected in a microcosm the evolution of attitudes toward labor in the United States.
R. Alton Lee emphasizes the social and political developments of labor in Kansas and what it was like to work in the mines, the oil fields, and the factories that created the modern industrial world. He vividly describes the stories of working people: how they and their families lived and worked, their dreams and aspirations, their reasons for joining a union and how it served their interests, how they fought to achieve their goals through the political process, and how employment changed over the decades in terms of race, gender, and working conditions.
The general public supported labor after the Civil War, but increasing urbanization and the farmer-dominated legislatures helped quell this sympathy, and new ire was eventually directed at the workingman. By examining the progress of industrial labor in an agrarian state, Lee shows how Kansans, like many Americans, could eagerly accept the federal largesse of the New Deal but at the same time bitterly denounce its philosophy and goals in the wake of the Great Depression.

R. Alton Lee is a professor emeritus of history at the University of South Dakota. He is the author of The Bizarre Careers of John R. Brinkley and T-Town on the Plains.

"Lee provides a compelling narrative of Kansas labor. Building on the accounts of other writers, Professor Lee further illuminates the story of the state's wage earners. He skillfully weaves Kansas politics into the fabric of the labor movement and puts this in a national context. Professor Lee has written a synthesis that captures the rich heritage of Kansas labor history."—Ralph Scharnau, Kansas History
“[Readers] will find Lee's grand narrative of Kansas's industrial development and labor's reaction and reform exceedingly valuable.”—Jeffrey A. Johnson, South Dakota History
"Lee covers a wide range of issues and incidents of significance to Kansas workers and to the politicians and labor leaders who took up their cause, from the railroad strikes and problems of the 1870s and 1880s to the struggle over 'right to work' in the late 1950s."—Nebraska History
"It is with regard to the economic, social, and political changes in Kansas as the twentieth century wore on that the book is most astute as a regional study of national trends. Lee expertly weaves the history of the Great Depression and New Deal reforms in terms of significant effects on working-class life and on changing governmental policies in Kansas. . . . Probably the most important chapter in Lee's study is "Farmer against Laborer," in which the author deals with a major problem in twentieth-century labor history that carries over into the current century: the failure of the movement to build upon or even advance its role in the American economy after the immediate postwar period. Although this is a national issue, Lee explains how it has played out in a largely agrarian state with a voting constituency that truly did not understand or perhaps even care to understand the necessity of economic democracy in the workplace."—Greg Hall, American Historical Review
“R. Alton Lee presents a well-researched narrative of organized labor, labor regulation, and the story of industrial work and workers in Kansas since the Civil War.”—Bill Mullins, Chronicles of Oklahoma
“Historians of the sunflower state have long valorized the agricultural roots of Kansas while largely overlooking the contributions of working men and women to the region’s history. In this thorough and well-researched study, Lee attempts to redress this gap in historical knowledge and trade the development of the political, cultural, and economic boundaries that came to divide farmers from wage earners. The volume admirably documents the development of this antagonistic relationship while also providing a detailed outline of labor history in Kansas. . . . Lee successfully explores workers’ struggles in the railroad industry, mining, itinerant farm labor, aeronautics, defense, oil, and meatpacking.”—Margaret C. Wood, Great Plains Quarterly 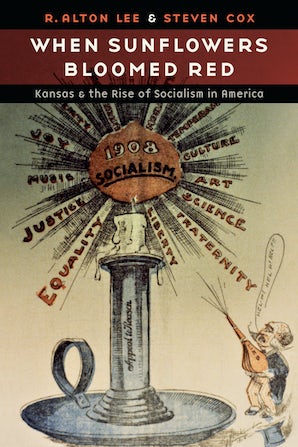