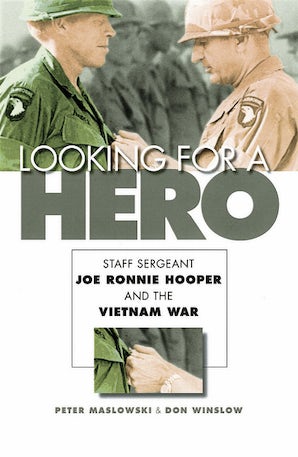 Looking for a Hero

Widely acclaimed as the Vietnam War's most highly decorated soldier, Joe Ronnie Hooper in many ways serves as a symbol for that conflict. His troubled, tempestuous life paralleled the upheavals in American society during the 1960s and 1970s, and his desperate quest to prove his manhood was uncomfortably akin to the macho image projected by three successive presidents in their "tough" policy in Southeast Asia. Looking for a Hero extracts the real Joe Hooper from the welter of lies and myths that swirl around his story; in doing so, the book uncovers not only the complicated truth about an American hero but also the story of how Hooper's war was lost in Vietnam, not at home.

Extensive interviews with friends, fellow soldiers, and family members reveal Hooper as a complex, gifted, and disturbed man. They also expose the flaws in his most famous and treasured accomplishment: earning the Medal of Honor. In the distortions, half-truths, and outright lies that mar Hooper's medal of honor file, authors Peter Maslowski and Don Winslow find a painful reflection of the army's inability to be honest with itself and the American public, with all the dire consequences that this dishonesty ultimately entailed. In the inextricably linked stories of Hooper and the Vietnam War, the nature of that deceit, and of America's defeat, becomes clear.

Peter Maslowski is a professor of history at the University of Nebraska–Lincoln and the author of several books, including Armed with Cameras: The American Military Photographers of World War II and (with Allan R. Millett) For the Common Defense: A Military History of the United States of America. Don Winslow is the best-selling author of, among other works, A Cool Breeze on the Underground, which received an Edgar nomination for best first novel.

"Looking For a Hero is an extraordinary feat of biographical reconstruction, as well as a powerful, poignant account of a nation at war. The tale of Joe Hooper's turbulent life and sad death transcends the story of America's most decorated Vietnam veteran to become a meditation about heroism, manhood, and the true cost of combat."—Rick Atkinson, Pulitzer Prize–winning author of An Army at Dawn
"Hooper's life presents the perfect microcosm of America's tortured involvement in the Vietnam War. Given that America's willingness to use military force to foster 'nation-building' and 'democracy' has not waned since Vietnam, the relevance of that conflict—and its heroes—remains significant."—Mark Clodfelter, author of The Limits of Air Power: The American Bombing of North Vietnam
"I was totally caught up in the story; reading it is like watching a train wreck in slow motion. I wish I had written this book. It is daring and it is original."—Roger J. Spiller, George C. Marshall Professor of Military History at the U.S. Army Command and General Staff College
"Peter Maslowski and Don Winslow's meditation on heroism and the Vietnam experience is a truly original book. Its protagonist is not one of the great and good, but a humble 'grunt.' . . . Looking for a Hero has a highly sophisticated structure that is developed with great skill. Maslowski and Winslow bind onto Hooper's modest life a history of the Vietnam era that assumes the form of a moral tale and operates at a number of levels."—Times Literary Supplement
"Peter Maslowski (who co-authored with Allan R. Millett For the Common Defense, still the best single-volume military history of America) and best-selling author Don Winslow have produced an exceptionally well-written journey through not only Joe Ronnie Hooper's life, but also through America's most troubled war."—Armchair General
“A stinging indictment of the government’s treatment of veterans of our most recent wars.”—Vietnam Veterans of America
“The complicated truth about American hero Joe Ronnie Hooper, widely acclaimed as the Vietnam War’s most highly decorated soldier, is set against the turbulent backdrop of the 1960s and 1970s and draws on exclusive interviews with friends, family members, and military colleagues, in a definitive study.”—Forecast
“Maslowski and Hooper provide a superb account, based on personal papers, extensive interviews, and official records, of ground combat in Vietnam.”—Journal of Military History
http://nebraskapress.typepad.com/university_of_nebraska_pr/2010/06/author-comments-on-messy-process-of-ending-wars.html