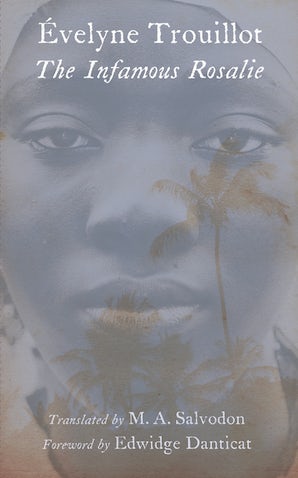 Lisette, a Saint-Domingue-born Creole slave and daughter of an African-born bossale, has inherited not only the condition of slavery but the traumatic memory of the Middle Passage as well. The stories told to her by her grandmother and godmother, including the horrific voyage aboard the infamous slave ship Rosalie, have become part of her own story, the one she tells in this haunting novel by the acclaimed Haitian writer Évelyne Trouillot.

Inspired by the colonial tale of an African midwife who kept a cord of some seventy knots, each one marking a child she had killed at birth, the novel transports us back to Saint-Domingue, before it became Haiti. The year is 1750, and a rash of poisonings is sowing fear among the plantation masters, already unsettled by the unrest caused by Makandal, the legendary Maroon leader. Through this tumultuous time, Lisette struggles to maintain her dignity and to imagine a future for her unborn child. In telling Lisette’s story, Trouillot gives the revolution that will soon rock the island a human face and at long last sheds light on the invisible women and men of Haitian history.

The original French edition of Rosalie l’infâme received the Prix Soroptimist de la romancière francophone, honoring a novel written by a woman from a French-speaking country which showcases the cultural and literary diversity of the French-speaking world.

Évelyne Trouillot was born in Port-au-Prince, Haiti, where she lives and works as a university professor. She is the author of four novels, four collections of short stories, two volumes of stories for children, two books of poems, and an award-winning play. The original French edition of Rosalie l’infâme received the Prix Soroptimist de la romancière francophone, honoring a novel written by a woman from a French-speaking country which showcases the cultural and literary diversity of the French-speaking world.
M. A. Salvodon, an associate professor of French at Suffolk University, translated, with Jehanne-Marie Gavarini, Nina Bouraoui’s Tomboy (Nebraska, 2007). Edwidge Danticat is a Haitian-born writer and the author of The Farming of Bones, winner of the American Book Award.

"In language both sumptuous and biting, Haitian university professor Trouillot gives us insight into New World slavery by telling the story of a Creole slave in 1750 Saint-Domingue."—Barbara Hoffert, Library Journal
"An uplifting homage to people loving one another and creating relationships under the most dire of circumstances."—Historical Novel Society
"Those who read Trouillot's novel in the English can do so as a result of the astute choices made by translator M.A. Salvadon and her sensitivity to the subject matter of the original text. . . . She has done the good deed and work of enabling more readers to access the work of the versatile and prolific contemporary Haitian writer, Évelyne Trouillot."—Danielle Legros Georges, Women's Review of Books

“A lyrically written novella on love, loss, and the creation of home by captive African women and men out of the horror of the Middle Passage. A wonderful contribution to the corpus of Francophone women writers in the Caribbean.”—T. Denean Sharpley-Whiting, Gertrude Conaway Vanderbilt Distinguished Professor of African American and Diaspora Studies and French, Vanderbilt University