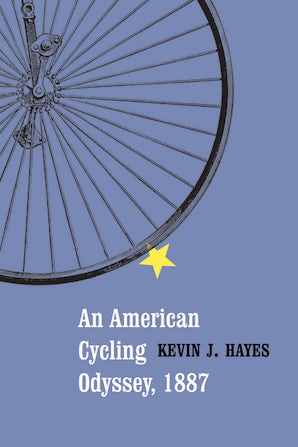 In 1887 a twenty-one-year-old newspaperman named George Nellis (1865–1948) rode a bicycle from Herkimer, New York, to San Francisco in seventy-two days, surpassing the transcontinental bicycle record by several weeks. He averaged fifty miles a day pedalling a fifty-two-inch, high-wheeled Columbia Expert "ordinary" bicycle with a tubular steel frame and hard rubber tires, and he lost twenty-three pounds in the process.

He bicycled ever westward through sleepy villages, farmlands, and growing cities of the rapidly changing nation and trekked across uninhabited stretches of prairies and mountains that marked its shrinking frontier. Following his daily ten-hour rides, Nellis sat down and wrote letters about his adventures to his hometown newspapers and a national cycling magazine to finance his cross-country journey.

Nellis's epic journey over dirt paths, muddy roads, and occasional railroad ties was plagued by terrible weather, frightening experiences, and odd encounters; yet it was also enriched by breathtaking natural wonders and the generous spirit of many people he met. He nearly drowned in a flash flood, was chased by a furious bull, killed a coyote that accosted him one night, fell victim to mirages in Utah's Great Salt Desert, narrowly missed a tremendous fire that wiped out half of a California town only hours after he had left, and witnessed a horrifying accident on a train track. Nellis also managed to meet the legendary baseball player A. G. Spalding in Chicago, take in professional baseball games in Detroit and Chicago, participate in several bicycle races in Omaha, attend an opera in Cheyenne, Wyoming, enjoy a circus, and eat over two dozen bananas in one sitting in Osceola, Indiana.

Drawing on Nellis's letters and media coverage of the trip, Kevin J. Hayes recreates in compelling detail this amazing trip and the many ordinary and extraordinary faces of late-nineteenth-century America that were once revealed to a young bicyclist.

Kevin J. Hayes is a professor of English at the University of Central Oklahoma. His numerous books include Melville's Folk Roots and Itinerant Observations in America.

"This is the story of a young man relentlessly chasing a dream across the country, battling headwinds, storms, and poor roads. It poses the challenge of possibility to the still-young. For those with more years, it reminds us of roads we've been down before, and those yet to cross."—Bloomsbury Review
"This is an enjoyable book about a little known aspect of US history."—Choice
"This was adventure before there were airplanes or fast automobiles, when cycling was still considered the ultimate in dangerous pursuits. Perhaps this sparkling account will give Nellis, unknown outside cycling circles, some of the lasting recognition he so richly deserves."—Booklist
"An enjoyable retelling of George Nellis's transcontinental bicycle journey in the late 19th century, smartly plaited with excerpts from his letters home and articles written for a cycling magazine. . . . Hayes adds invaluable historical footnotes to the places Nellis cycles through." —Kirkus Reviews
"A remarkable story." —Doug Nufer, Rain Taxi Review of Books
"An entertaining, informative, and well-written romp across late-nineteenth-century America."—Alan Boye, author of The Complete Roadside Guide to Nebraska