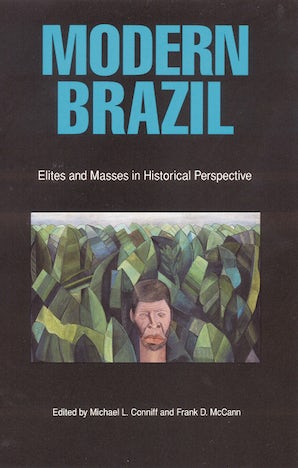 Elites and Masses in Historical Perspective

Modern Brazil, a collection of original essays, views the largest country in South America through the multiple lenses of political science, economics, telecommunications, and religion. The editors, Michael L. Conniff and Frank D. McCann, have provided a frame for this analysis of a complex society by centering on the elites, those who run national affairs, and the masses, those poor and working-class people who have little direct influence on them.

Discussing the political elites from regional, national, and military standpoints are, respectively, Joseph L. Love and Bert J. Barickman, Conniff, and McCann. The economic elites, notably businessmen and industrialists, are analyzed by Steven Topik and Eli Diniz. The masses are considered in chapters by Eul Soo Pang, Thomas Holloway, and Michael Hall and Marco Aurelio García. Sam Adamo views the historical situation of blacks and mulattos in Brazil. In the final section, examining connections between the elites and masses, Robert M. Levine writes about how the former perceive the povo, Joseph Straubhaas looks at the mass media; and Fred Gillette Strum ex-amines religion in Brazil. The editors have included a general introduction, an epilogue focusing on Brazil in the late 1980s, and a glossary.