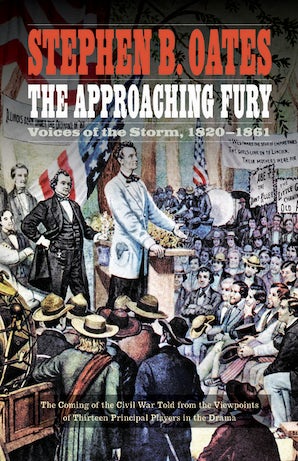 Biographer and historian Stephen B. Oates tells the story of the coming of the American Civil War through the voices and perspectives of thirteen principal players in the drama, from Thomas Jefferson and Henry Clay in the Missouri crisis of 1820 down to Stephen A. Douglas, Jefferson Davis, and Abraham Lincoln in the final crisis of 1861. This innovative approach shows the crucial role that perception of events played in the sectional hostilities that pushed the United States irreversibly toward a national calamity.
Nat Turner, William Lloyd Garrison, John C. Calhoun, Frederick Douglass, Harriet Beecher Stowe, George Fitzhugh, John Brown, and Mary Boykin Chesnut also provide perspectives. Each character takes a turn onstage, narrating critical events in which he or she was a major participant or eyewitness. For the dramatic monologues, Oates draws on the actual words of his speakers—in letters, speeches, interviews, recollections, and other recorded utterances—and then simulates how, were they reminiscing aloud, they would describe these events in which they were the principal actors or witnesses. All the events and themes reflect the historical record.

Stephen B. Oates is Kendall Professor of History Emeritus at the University of Massachusetts–Amherst and has published eighteen books, including The Whirlwind of War: Voices of the Storm, 1861–1865 (Nebraska 2012) and With Malice Toward None: A Biography of Abraham Lincoln. Oates is a recipient of the Nevins-Freeman Award of the Chicago Civil War Round Table for lifetime achievement in the field of Civil War studies.

“This book powerfully re-creates some of the momentous events that produced the catastrophe of 1861. Oates succeeds in bringing his characters alive . . . [and] in getting inside each of them. . . . He presents their arguments with great force and conviction.”—Robert V. Remini, New York Times Book Review
“Oates has admirably succeeded in bringing to life this critical and turbulent time in American history, and as such this book is an excellent introduction to the complex problems confronting America as it moved inevitably toward war.”—Raymond Frey, Magill Book Reviews
“Oates’s approach is at once bold and inventive, daring and insightful. . . . . His dialogue between characters, ingeniously developed for maximum dramatic effect, forcefully explains the defining moment of American history like no previous narrative of the times. I found myself immersed completely in his story and his characters. . . . A sparkling and forceful contribution to historical literature.”—Professor Daniel E. Sutherland, University of Arkansas, Department of History
“There can be few complaints about the historical accuracy and authenticity of Oates’s material. It comes from the printed record, either what his characters said or wrote or what other historians have written about them. . . . Oates has written a lively book.”—Jean H. Baker, American Historical Review
“Oates’s method of presenting the material makes this book extremely valuable as a summary of views and as a means of understanding the tumultuous years before the Civil War. This novel approach to the telling of history is highly readable.”—Richard L. Kiper, Military Review
“Oates brings the contending voices of 1860 back to life and vividly shows why the nation leapt off the precipice into civil war. For anyone interested in those traumatic years, The Approaching Fury is vital reading.”—Orange County Register 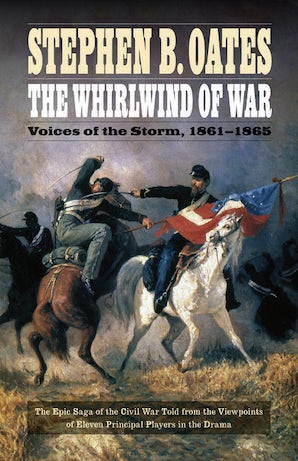 The Whirlwind of War