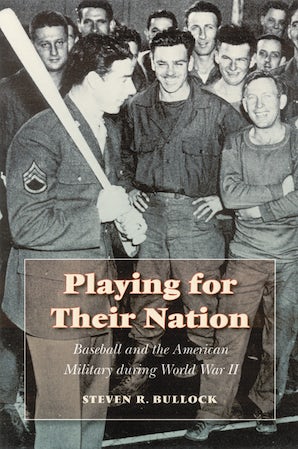 Playing for Their Nation

Baseball and the American Military during World War II

Just two months after the magical baseball season of 1941, the United States entered World War II, and baseball, like other American institutions, was called upon to sacrifice and serve in the war effort. Utilizing personal accounts, military documents, and newspaper sources, Playing for Their Nation provides the first in-depth analysis of the development of military baseball during the Second World War.

Steven R. Bullock describes how virtually every significant American military installation around the world boasted formal baseball teams and leagues designed to soothe the anxieties of combatants and prepare them physically for battle. Officials also sponsored hundreds of exhibition contests involving military and civilian teams and tours by major league stars to entertain servicemen and elevate their spirits.

Fund-raising by the Major Leagues proved remarkably successful in the encouragement of war bond sales and in donations of equipment for military teams. By the end of the war, more than ninety percent of the players on prewar Major League rosters served in the armed forces, and Bullock relates the wartime experiences of the players, such as Joe DiMaggio and Ted Williams. Also provided is the statistical analysis of the negative impact of the war on the careers of Major League players in terms of their reduced productivity and shortened careers.

Proving itself to be much more than a game, baseball offered comfort and pride to a military, and a nation, gripped by war.

Steven R. Bullock is an assistant professor of history at the University of Nebraska at Omaha.

"This sharp, well-researched book digs into the archives to unearth the formal and not-so-formal teams comprising major leaguers and not-so-major leaguers that worked to 'soothe the anxieties of combatants and to physically prepare them for battle.'"—Mark Luce, Chicago Tribune
“No prior treatment of baseball during the war has demonstrated how extensively the game penetrated the camps, bases, and even the training practices of the troops.”—Choice
“Steven R. Bullock’s fine compact book provides a more comprehensive overview of how baseball interacted with the American military during World War II. . . .Bullock provides extensive documentation, drawing upon player interviews, military archival material, Sporting News articles, and other sources. He writes in clear, academic prose, incorporates rich anecdotes, and provides good analysis.”—David L. Porter, Journal of American History