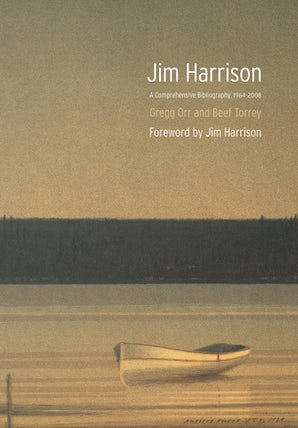 Jim Harrison, a literary maverick, is widely considered one of the great and iconic writers in contemporary American literature. This pioneering volume, an extensive and up-to-date illustrated guide to Harrison’s published works, is the first full-length catalog of a distinguished literary career spanning more than forty years. Longtime Harrison readers and collectors Gregg Orr and Beef Torrey have amassed a thorough list of the author’s wide-ranging work, annotated and arranged by genre to provide a full view of the breadth of Harrison’s accomplishment. This work contains more than sixteen hundred citations of writings by and about Harrison, including his fiction, poetry, essays, interviews, screenplays, criticism, and reviews; it also features photographs of his books, dust jackets, and broadsides.
With a foreword by Harrison, penned especially for this seminal volume, and an introduction by writer and scholar Robert DeMott, this is the definitive bibliographical study of a major figure in late twentieth- and early twenty-first-century American letters.

Jim Harrison was born in Grayling, Michigan, in 1937 and grew up close to the land, spending his time fishing and hunting. In his teens he committed himself to be a writer and has never looked back.  His first book of poetry, Plain Song, was published in 1965; his first novel, Wolf, in 1971. In 2007 he was elected into the American Academy of Arts and Letters. He lives in Montana and Arizona, where he continues to write and publish.
Gregg Orr, a vice president with Westower Communications, has assembled the most complete private collection of Jim Harrison’s published material known to exist. He assisted in the preparation of the Rothschild bibliographical catalog of William Somerset Maugham.
Beef Torrey (1958–2013) was a psychologist associate at Beatrice State Developmental Center in Nebraska, the editor of Conversations with Thomas McGuane and the senior editor of Conversations with Hunter S. Thompson.
Robert DeMott, the Edwin and Ruth Kennedy Distinguished Professor of English at Ohio University, is the author or editor of more than fifteen books, including Conversations with Jim Harrison.

"This welcome book of "bibliographic celebration"—published while its subject is still productive—includes annotated lists of all of Jim Harrison's work. . . . This is an indispensable book for all collections of midwestern and western literature."—J. J. Wydeven, CHOICE

A Note on Structure

Section A: Books and Broadsides by Jim Harrison