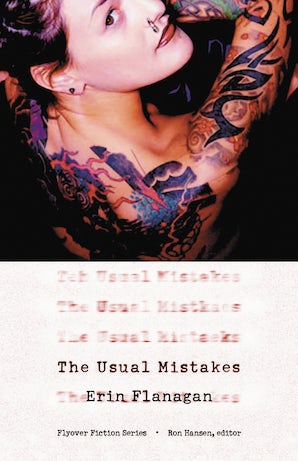 These characters may be the usual suspects, making the usual mistakes, but their stories are not the usual fare. Populated by pretenders, ex-cons, and wannabes who bend the rules, break the law, and risk everything to salvage their own hearts, the twelve stories in The Usual Mistakes conduct readers into a world where betrayal is just a beginning. Deception, infidelity, even death—where a person goes from there is the mainspring of Erin Flanagan’s fiction, and in the turns her characters take, we find rare insights: that we are often wedded to one another because of, not in spite of, our flaws and that this paradoxical connection may be cause for hope.
An impostor medical assistant and an ex-neo-Nazi, covered head-to-toe in swastika tattoos; a seemingly oafish but suddenly sympathetic husband and a boorish mother-in-law in need of comforting; a young boy who finds adulthood by learning to forgive: the characters in these stories are by turns inappropriate, outlandish, selfish, and kind, complicated in the ways only real people are. Though they ask for little and rarely get even that, they do astonishing things with whatever does come their way; and their stories, in Flanagan’s sure hands, never fail to surprise.

"Readers, beware. In Erin Flanagan's smart, funny, impossible-to-put-down stories, terrible things happen to good people. Lives are upset and complicated debts incurred, but those events are just the beginning. Flanagan writes with bleak, searing humor about the survivors of collisions both physical and emotional, and her acute vision is startling, reminding readers that every loss is the beginning of a long, new story of healing and replenishing."—Erin McGraw, author of The Good Life
"[Flanagan's] yarns of Midwesterners struggling with modern life are brightened by her sharp sense of humor."— Midwestern Writers to Watch, John Mark Eberhart, Kansas City Star
"If this second release to the fledgling 'Flyover Fiction' series is typical, one can safely predict that the series will be among the most significant in American letters. Flanagan writes with some of the same penetrating insights into the human condition that one finds in the work of Eudora Welty, Katherine Anne Porter, and Tennessee Williams. . . . Flanagan has a remarkable ability to penetrate the real people behind the facades they present to an often-judgmental public. This first collection augurs well for Flanagan's future. Hers is a singular talent. This book belongs in all collections supporting study of the short-story genre."—Choice
"In 'Intervention,' another standout among the 12 pieces, Kate's boyfriend drags her to Myrtle Beach, where his mother has plotted to end his father's drinking; rather than a somber attempt to turn someone's life around, the intervention (the third in three years) most closely resembles a Super Bowl party. . . . The inventiveness of [Flanagan's] deceptively mild plots keep common themes fresh."—Publishers Weekly
"In this aptly titled debut collection, Flanagan's midwestern characters are driven by regret. . . . Flanagan's characters aren't afraid to stir the pot in the course of the action either. . . . Most of these tales . . . particularly the title story, about a lonely widow and a tattooed girl in an unlikely alliance, are enjoyable and tender, as good outweighs regret after all."—Booklist
“Given the range of situations portrayed in these stories—from the ordinary to the bizarre—Flanagan presents a consistent optimism about the possibilities for good behavior. . . . Flanagan . . . deftly probes the complexities of emotional relationships. . . . If The Usual Mistakes is representative of what’s to come in this series, readers of fiction have much to look forward to.” —Lincoln Journal Star 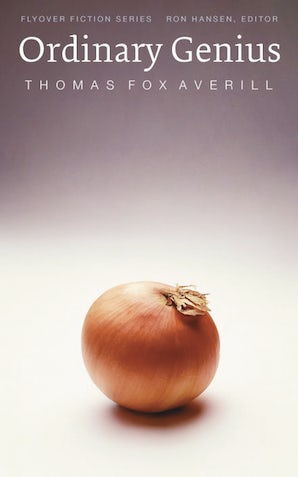