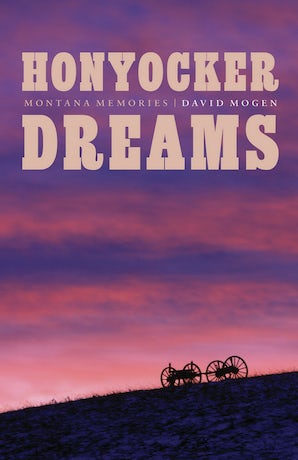 Whether they were actually Hungarian or Bohemian, “Hunkies” or “Bohunks,” or even from Eastern Europe at all, to the old ranchers of the Great Plains, the farmers and settlers who moved in and fenced off the open land were no-account “Honyockers.” And to Honyockers like David Mogen’s people, who built lives in the face of great difficulty and prejudice, the name came to bear all the meaning and power of their hard-won home place. It is this sense of place, of tenacious if uneasy belonging, that David Mogen traces through his family history in Honyocker Dreams.
Beginning with his father’s reminiscences as he surveys the Montana landscape, Mogen weaves a narrative of memory and history, of the dreams and disappointments of working-class farmers, cowboys, and miners among his ancestors, and of the post-frontier world of Indian reservations and farming towns that endure on the Montana “Hi-Line,” the flat expanse of Big Sky country that lies hard against the Canadian border east of the Rockies. From the frontier world of his parents and pioneer ancestors to the boom-and-bust tales about growing up in the small-town world of his own Montana childhood in the 1950s, Mogen travels full circle to recent journeys that reveal the paradoxical burdens and strengths of his father’s cowboy legacy as well as the hidden pain and healing power of his mother’s homesteading heritage. His is a journey that opens a window on a unique but little-known region of Montana and the West.

David Mogen is a professor of English at Colorado State University. He is the coeditor of several books, including Frontier Gothic: Terror and Wonder at the Frontier in American Literature, and is the author of Wilderness Visions: The Western Theme in Science Fiction Literature and Ray Bradbury.

"Honyocker Dreams is full of humor, sharp details, clear prose, and reflections on what it means to be a Westerner, past and present."—Jenny Shank, New West
"David Mogen, CSU English professor, has penned a realistic memoir that will trigger memories in all, even if you don't know what in the world a honyocker is."—Nancy Hansford, Coloradoan
"Mogen deftly revisits the geographies of his past, resulting in an eloquent testimony to the grit and aspirations of his parents and his own talent as a lyrical chronicler."—O. Alan Weltzien, Western American Literature
"I grew up in South Texas, about as far south as one can get from the Hi-Line and still be in the United States. But the book continually brought back memories I didn't even know I had about what it was like to be a kid growing up in a small town, where one learns to rely on one's own resources. In Mr. Mogen's fine book, we learn as much about ourselves as we do about him."—David Crisp, Billings Outpost
"David Mogen offers critical acumen in thrilling anecdotes."—Nick Bascom, Great Plains Quarterly
"Honyocker Dreams implicitly encourages us to comprehend our origins, to become mindful of the often complex influences of place and people who have shaped us."—Brian Dillon, Billings Gazette

Homing in on the Hi-Line

Will the Circle be Unbroken?

Riding the Hi-Line into the Past