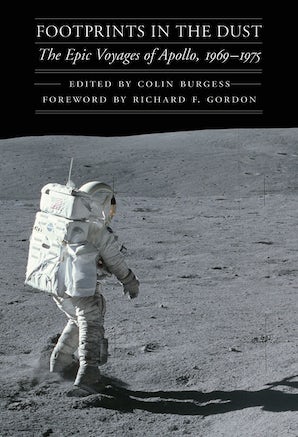 Footprints in the Dust

Following the fortieth anniversary of Apollo 11, as NASA prepares to return astronauts to the moon, Footprints in the Dust offers a thorough, engrossing, and multifaceted account of the Apollo missions.
The flight of Apollo 11 was a triumph of human endeavor, persistence, and technology, one of the greatest achievements in human history. This book begins with the mission that sent Neil Armstrong and Edwin “Buzz” Aldrin to the moon, then follows American spaceflight through the harrowing rescue of Apollo 13 before moving on to the successful joint Apollo-Soyuz mission in 1975. Drawing on extensive research and interviews with key figures in the space program, the authors convey the human drama and chart the technological marvels that went into the Apollo missions. They also put the accomplishments of American spaceflight into historical context, examining the competitive space race with the Soviet Union, the roles of politics and personality in launching the mission, and the consequences, practical and profound, of this giant leap for mankind.

Colin Burgess is the coauthor of Fallen Astronauts: Heroes Who Died Reaching for the Moon; Into That Silent Sea: Trailblazers of the Space Era, 1961–1965; and In the Shadow of the Moon: A Challenging Journey to Tranquility, 1965–1969, all available from the University of Nebraska Press. Richard F. Gordon was one of the third group of astronauts named by NASA in October 1963. He completed two space flights, as pilot and spacewalker on the Gemini 11 mission and as command module pilot for Apollo 12.
Contributors: Philip Baker, Geoffrey Bowman, Colin Burgess, Stephen Cass, Melvin Croft, Rick Houston, Robert Pearlman, Dominic Phelan, Simon A. Vaughan, and John Youskauskas.

"A superb work and well worth your time."—Brian Laslie, Balloons and Drones
"[Footprints in the Dust is] an interesting account of US and Soviet lunar missions."—J.Z. Kiss, Choice
“Elegantly written and scrupulously researched, this marvelous book not only opens a window on a truly dynamic period but is one of those rarities in spaceflight literature—a compelling and enjoyable page-turner. It captures magnificently the remarkable spirit of those involved in the Apollo story.”—Charles M. Duke Jr., Apollo 16 astronaut and moonwalker
“We who engaged ourselves in making the Apollo program a reality realize the tremendous importance and responsibility of inspiring young people, our future space pioneers. This book emphasizes the notion that seemingly ordinary people can do quite extraordinary things, and we are not bound by our dreams. A remarkable tale of triumph and melancholy.”—Ed Buckbee, author (with Wally Schirra) of The Real Space Cowboys
“Like its predecessors in the Outward Odyssey series, this vivid and entertaining book reveals the human side of space exploration. We all too often think of the Apollo program as a technical achievement, when, in fact, it was the human element that made it successful.”—Al Worden, Apollo 15 astronaut and chairman of the Astronaut Scholarship Foundation

Prologue: Realization of a Dream of Ages

1. The Whole World Was Watching

2. The Eagle and the Bear

3. Rendezvous on the Ocean of Storms

6. Science, and a Little Golf