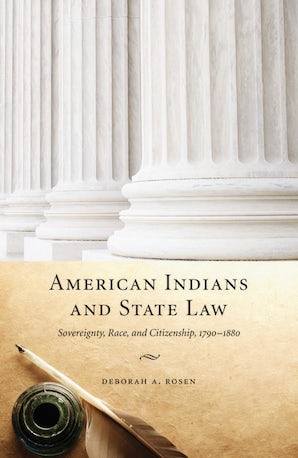 American Indians and State Law examines the history of state and territorial policies, laws, and judicial decisions pertaining to Native Americans from 1790 to 1880. Belying the common assumption that Indian policy and regulation in the United States were exclusively within the federal government’s domain, the book reveals how states and territories extended their legislative and judicial authority over American Indians during this period. Deborah A. Rosen uses discussions of nationwide patterns, complemented by case studies focusing on New York, Georgia, New Mexico, Michigan, Minnesota, Louisiana, and Massachusetts, to demonstrate the decentralized nature of much of early American Indian policy.

This study details how state and territorial governments regulated American Indians and brought them into local criminal courts, as well as how Indians contested the actions of states and asserted tribal sovereignty. Assessing the racial conditions of incorporation into the American civic community, Rosen examines the ways in which state legislatures treated Indians as a distinct racial group, explores racial issues arising in state courts, and analyzes shifts in the rhetoric of race, culture, and political status during state constitutional conventions. She also describes the politics of Indian citizenship rights in the states and territories. Rosen concludes that state and territorial governments played an important role in extending direct rule over Indians and in defining the limits and the meaning of citizenship.

Deborah A. Rosen is a professor of history at Lafayette College in Easton, Pennsylvania. She is the author of Courts and Commerce: Gender, Law, and the Market Economy in Colonial New York and coeditor of Early American Indian Documents: Treaties and Laws, 1607–1789, volumes 15, 16, and 17.

"Rosen provides a detailed study of an under-explored feature of U.S.-Native American relations—the role of the states—and makes valuable contributions to a number of social sciences literatures."—Kevin Bruyneel, Journal of American History
"This important book succeeds in making the case that states exercised considerable control over Indian peoples during the 19th century—at times creatively interpreting or even contradicting federal Indian policy."—T. A. Britten, Choice
"Rosen has produced a most comprehensive study. . . . The author has succeeded in integrating a huge amount of significant material culled from both primary and secondary sources. . . . A valuable reference for historians and general readers."—Yasuhide Kawashima, American Historical Review
"Rosen's extensive notes and comprehensive research allow her to document in great detail the efforts of states to control certain aspects of Indian lives through legislation and courts. . . . Anyone interested—and there are likely many—in state law and American Indians should read this book."—Christian McMillen, Western Historical Quarterly
"Rosen has made an impressive contribution to the fields of Indian law and U.S.-Indian history. . . . Her timely and important book will help readers understand the evolving state-tribal relations in the early twenty-first century."—Donald L. Fixico, The Annals of Iowa
"While the role of the federal government and tribal relations has long been documented, the role of the state and the immediacy and daily conflict of early state/tribal relations is less well known. Rosen's book provides valuable research and insights on the early state laws, cases, and constitutions in relation to Indian peoples."—Kathryn E. Fort, Great Plains Research
"Lucidly written and rooted in careful research, the book represents a significant contribution to the literature on Indian law and Native American political history."—Andrew Denson, Georgia Historical Quarterly
"This is an important book for legal history as well as American Indian history. The extent of state law intrusion into tribal affairs is now clearly delineated."—Gordon Morris Bakken, Journal of the West

3. Slavery, the Law of Nations, and Racial Classification   000