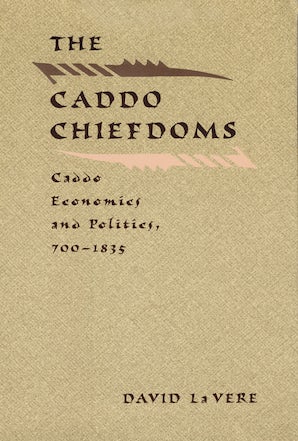 For centuries, the Caddos occupied the southern prairies and woodlands across portions of Louisiana, Texas, Oklahoma, and Arkansas. Organized into powerful chiefdoms during the Mississippian period, Caddo society was highly ceremonial, revolving around priest-chiefs, trade in exotic items, and the periodic construction of mounds. Their distinctive heritage helped the Caddos to adapt after the European invasion and to remain the dominant political and economic power in the region. New ideas, peoples, and commodities were incorporated into their cultural framework. The Caddos persisted and for a time even thrived, despite continual raids by the Osages and Choctaws, decimation by diseases, and escalating pressures from the French and Spanish.

The Caddo Chiefdoms offers the most complete accounting available of early Caddo culture and history. Weaving together French and Spanish archival sources, Caddo oral history, and archaeological evidence, David La Vere presents a fascinating look at the political, social, economic, and religious forces that molded Caddo culture over time. Special attention is given to the relationship between kinship and trade and to the political impulses driving the successive rise and decline of Caddo chiefdoms.

Distinguished by thorough scholarship and an interpretive vision that is both theoretically astute and culturally sensitive, this study enhances our understanding of a remarkable southeastern Native people.

David La Vere is an assistant professor of history at the University of North Carolina, Wilmington, and the author of Life among the Texas Indians: The WPA Narratives.