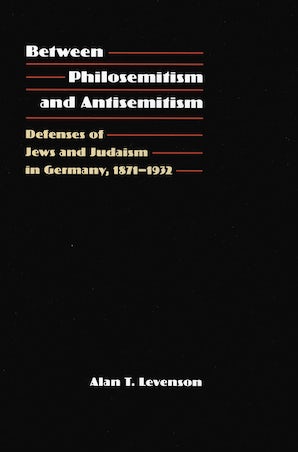 Between Philosemitism and Antisemitism

Philosemitism, as Alan T. Levenson explains it, is “any pro-Jewish or pro-Judaic utterance or act.” The German term for this phenomenon appeared in the language at roughly the same time as its more famous counterpart, antisemitism, and its emergence signifies an important, often neglected aspect of German-Jewish encounters. Between Philosemitism and Antisemitism offers the first assessment of the non-Jewish defense of Jews, Judaism, and Jewishness from the foundation of the German Reich in 1871 until the ascent of the Nazis in 1932, when befriending Jews became a crime.

Levenson takes an interdisciplinary look at fiction, private correspondence, and published works defending Jews and Judaism in early twentieth-century Germany. He reappraises the missionary Protestant defense of Judaism and advocacy of Jewry by members of the German peace movement. Literary analysis of middle-brow novels with positive Jewish characters and exploration of the reception of Herzlian Zionism further illuminate this often overlooked aspect of German-Jewish history.

Between Philosemitism and Antisemitism shows the dynamic process by which a generally despised minority attracts defenders and supporters. It demonstrates that there was sympathy for Jews and Judaism in Imperial and Weimar Germany, although its effectiveness was bounded by the values of a bygone era and scattered across the political and social spectrum.

Alan T. Levenson is a professor of Jewish history at Laura and Alvin Siegal College of Judaic Studies.

“Whether addressing voices in the German peace movement, authors of works of fiction, missionaries, or supporters of Herzlian Zionism, Levenson detects a common thread of otherness preventing any mutually constructive German-Jewish symbiosis from emerging. In the shadow of the Holocaust, Levenson demonstrates that all shades of anti-semitism were present in the German culture . . . the complex matrix of social interaction that made the Holocaust possible.”—D. A. Meier, Choice
“A vigorous defense of philosemitism as a moral and intellectual category in the history of German-Jewish relations from Bismarck to Hitler.”—Central European History
“Levenson presents a balanced picture that is neither apologetic of the German intellectual tradition nor indulges in the simplistic construction of an antisemitic German ‘national character.’ . . . The book is very interesting throughout, carefully argued and documented, and well-written. It should be widely read.”—Marcel Stoetzler, German Studies Review
“Levenson’s analysis is penetrating and his conclusions . . . are well worth considering.”—Daniel J. Rettberg, Association of Jewish Libraries Newsletter