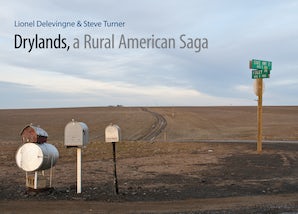 Family values, hard-won success, and tough love for tough times: when we talk about America as an image and an ideal it is generally the enduring reality of middle-American virtue, deep roots, and rural life that we imagine. Focusing on Adams County in the Columbia Plateau in eastern Washington, Drylands, a Rural American Saga is a pictorial essay documenting the reality underlying our national self-portrait. Both an exception to and a paradigm of the country’s agricultural folkways, Adams County offers a panorama of rolling cropland, sagebrush scree, and deep coulees formed by volcanic forces and ice-age floods. The shortage of rainfall, however, mocks the richness of the soils produced by prehistoric events. Yet as documented in these pages, the harvests of Adams County produce a significant share of the nation’s food, standing as clear testimony to the skill and perseverance of those who work the land.
Lionel Delevingne’s evocative photographs capture the essence of life centered on the annual rhythm of cultivation, planting, harvest, and marketing. His lens also captures the troubles that have led to abandoned farmsteads, shrinking towns, and shuttered local businesses. Together with Steve Turner’s stirring essays, Delevingne’s photographs provide a true portrait of the American landscape, of those who have failed, those who have prospered, and those who struggle on, unseen by motorists speeding by on the interstate.

Lionel Delevingne is an independent photojournalist whose credits include the New York Times, Newsweek, Washington Post Magazine, Mother Jones, and Vanity Fair. He has had many solo exhibits both in the United States and abroad and is the coauthor of Northampton: Reflections on Paradise and Franco-American Viewpoints. Steve Turner is a freelance journalist whose work has appeared in the Boston Globe, the Washington Post, and the New York Times, among many publications. He is the author of Amber Waves and Undertow: Peril, Hope, Sweat, and Downright Nonchalance in Dry Wheat Country.

“Drylands is a beautiful, soulful exploration of an ordinary place made extraordinary through the words and pictures of two accomplished craftsmen. It is evocative of the best collaborations between writers and artists who explore rural America, going beyond a simple elegy for rural life and choosing instead to frame Adams County as both a unique place and a proving ground for the dynamic and complex changes reshaping American agriculture and small towns across the nation. It will be a compelling book for many audiences.”—Matthew Klingle, author of Emerald City: An Environmental History of Seattle