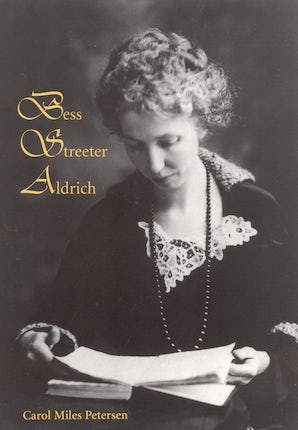 The Dreams Are All Real

Beloved by readers for decades, Bess Streeter Aldrich earned a national reputation with a long list of best-selling novels and with stories appearing in major magazines such as Ladies’ Home Journal, Harper’s Weekly, Colliers, McCalls, and The Saturday Evening Post. Her most famous novel, A Lantern in Her Hand, has remained a favorite since first published in 1928.
Carol Miles Petersen has thoroughly researched Aldrich, consulting Aldrich’s family, neighbors, and friends, poring over letters and newspapers, and reading Aldrich’s work again and again. In Bess Streeter Aldrich she reveals a woman as strong and substantial as Aldrich’s fictional heroines.
Born in Iowa in 1881, Bess Streeter grew up and attended college there. After becoming a teacher, she met and fell in love with Charles “Cap” Aldrich, formerly Captain in the U.S. Army. After their marriage in 1907, they moved to Elmwood, Nebraska, where Bess devoted herself to raising children while Cap became a banker.
Bess began to write and sell short stories, winning a national award and enjoying the celebrity of a famous author. It appeared that the Aldriches would live happily ever after; however, in 1925, Captain Aldrich suddenly died. The responsibilities of raising the family and managing the bank as a partial owner fell upon Bess. With the stock market crash of 1929, the nation’s banking system spun into chaos—more than ever, her family, her bank, and her town depended on Bess.
Aldrich’s heroism is of the old-fashioned kind, not a moment of glory but a lifetime of effort, not a battle with a foe but a creation of love, humor, and kindness. Her stories were written to remind her readers of the joy of life.

Carol Miles Petersen formerly taught at the University of Nebraska–Lincoln. She is editor of the Collected Short Works of Bess Streeter Aldrich (Nebraska 1995).