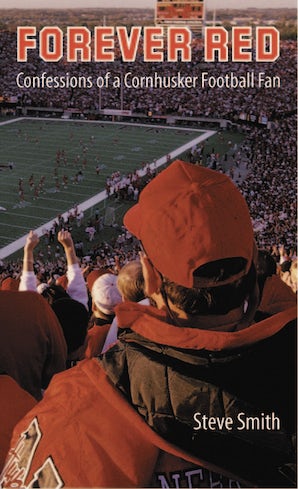 Confessions of a Cornhusker Football Fan

On any given workday, any little thing might send Steve Smith’s thoughts spinning back to Saturday—last Saturday, Saturday two weeks ago, Saturday two years ago, back into the thrilling minutiae of game day—until reality reminds him: this is not how well-adjusted adults act. Steve Smith is not a well-adjusted adult. He’s a Nebraska football fan, and this is his rollicking account of what it’s like to be one of those legendary enthusiasts whose passion for the Cornhuskers is at once alarming and hilarious.
A journey into an obsessed Nebraska fan’s soul, Forever Red immerses readers in the mad, mad world of Cornhusker football fandom—where wearing the scarlet-and-cream Huskers gear has its own peculiar rules; where displaced followers act as the program’s ambassadors, finding Cornhusker subculture beyond the pale; and where the team’s performance can barely keep pace with its followers’ expectations but sometimes exceeds their wildest dreams. Blending wit and insight, Smith’s story of twenty-plus years following the team takes readers back to memorable game moments from 1980 to the new era under coach Bill Callahan, offering the uninitiated and the fellow fanatic alike a window on the world where fantasy and football meet, where dreams of glory and gritty gridiron realities forever join.

Steve Smith is an award-winning journalist now working as online editor for the Lincoln Journal Star.

"Forever Red is a perfect blend of humor and insightful commentary."—Lincoln Journal Star
"Through the years, my experiences in the world of Big Red football have been fairly extensive so it isn't often that I come upon something unique and refreshing in our Husker realm. And I must admit that for the first time ever, I've come across 'velociraptors' roving from sideline-to-sideline and to being 'flummoxed' on the football field. Outstanding! This is all part of the deep post pattern for a score that Steve Smith has thrown in Forever Red: Confessions of a Cornhusker Football Fan. . . Although I'm sure he'd rather characterize it as a 76 yard speed option play for a touchdown and a national championship! This is a marvelous microcosm of where Big Red fever can take you. From the tether and pull of blind acceptance and unequivocal support of the program to disappointment, doubt, and frustration. As Smith mentions, when the years move on to more reasoned recognition, but in Nebraska, this microcosm easily morphs to a type of quasi Big Red macrocosm which engulfs the state and reaches far beyond into the world of college football. Smith captures all of this in this highly personal, soul-baring experience. And finally, Forever Red is all about passion . . . Having a passion for what you do and how you feel . . . How to use your passion to enhance your life, and, more importantly, enhance the world and the lives around us. Forever Red: Confessions of a Cornhusker Football Fan . . . Confessions which merit 3 Hail Marys and has nothing to do with absolution!"—Adrian Fiala, Nebraska football, 1965-1970, and Color Voice of the Huskers on the Pinnacle Sports Network, 17 years
"In Forever Red Steve Smith captures the true spirit of the state of Nebraska and what makes it tick. You will quickly recognize yourself, family members, and friends in Smith’s hilarious observations and stories about Nebraska football history, as seen through the eyes of its fans. This is a must-read not only for Cornhuskers but for true sports fans everywhere."—Charlie McBride, former Nebraska defensive coordinator
"Much has been written about Nebraska football, but nothing quite like this. Steve Smith treats a sometimes-solemn subject with self-effacing humor and insight belying his assertion that Cornhusker football fans aren’t unique. In fact, they are. And Forever Red is Exhibit A. It is not only about football but also about growing up in small-town Nebraska, which is as good as it gets."—Mike Babcock, author of Stadium Stories: Nebraska Cornhuskers
“Thinking about these things with Smith will not spoil your fall season. In fact, ‘Forever Red’ might make it better. Worth a read in states well outside the domain of the old Big Eight or even the new Big 12.”—El Dorado Times