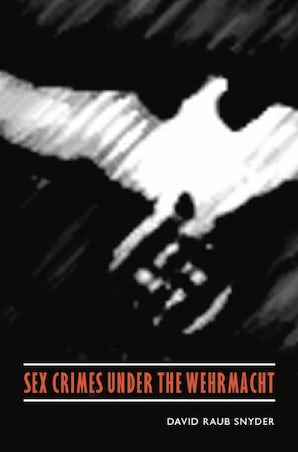 Sex Crimes under the Wehrmacht

In this groundbreaking work, David Raub Snyder offers a nuanced investigation into the German army’s prosecution and punishment of sex offenders during the Second World War. In so doing, Snyder restores balance to the literature regarding the military administration of justice under Hitler and to the historiography of sexuality and the Third Reich. Although scholars have devoted considerable attention to military offenses, the literature is largely silent about crimes punishable under civilian law.
In many cases, the Wehrmacht’s response to rape, sexual assault, homosexual “offenses,” child molestation, incest, “racial defilement,” and bestiality often depended on the willingness of the offender to continue to bear arms for his country. Snyder notes that, contrary to conventional wisdom, soldiers on the eastern front often received severe punishments for sexual assaults on Soviet civilians. He demonstrates how military expedience and military justice became entangled and conflicted during the war.
Snyder also analyzes the Wehrmacht's unique penal and parole system, the first treatment of this important topic in the English language. The Wehrmacht’s system functioned as a filtering mechanism that rechanneled willing soldiers back to the front while simultaneously channeling recalcitrant or “incorrigible” soldiers in the opposite direction—to concentration camps for destruction through work at the hands of the SS.
Supported by research in Germany and detailed accounts largely unavailable in English until now, Snyder offers new perspectives on justice under the Wehrmacht and the situations of homosexuals, women, and children during wartime.