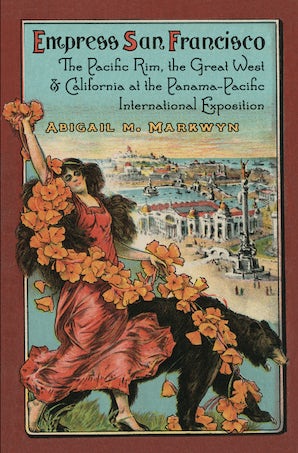 The Pacific Rim, the Great West, and California at the Panama-Pacific International Exposition

When the more than 18 million visitors poured into the Panama-Pacific International Exposition (PPIE) in San Francisco in 1915, they encountered a vision of the world born out of San Francisco’s particular local political and social climate. By seeking to please various constituent groups ranging from the government of Japan to local labor unions and neighborhood associations, fair organizers generated heated debate and conflict about who and what represented San Francisco, California, and the United States at the world’s fair. The PPIE encapsulated the social and political tensions and conflicts of pre–World War I California and presaged the emergence of San Francisco as a cosmopolitan cultural and economic center of the Pacific Rim.
Empress San Francisco offers a fresh examination of this, one of the largest and most influential world’s fairs, by considering the local social and political climate of Progressive Era San Francisco. Focusing on the influence exerted by women, Asians and Asian Americans, and working-class labor unions, among others, Abigail M. Markwyn offers a unique analysis both of this world’s fair and the social construction of pre–World War I America and the West.

Abigail M. Markwyn is an associate professor of history at Carroll University. She is the coeditor of Gendering the Fair: Histories of Women and Gender at World’s Fairs.

"Empress San Francisco is an excellent work, and it will be of interest to students and scholars of world's fairs, American western settlement, urban development, and Progressive-era racial, ethnic, and gender relations, reform movements, and foreign relations."—Elaine Naylor, American Historical Review
"By emphasizing the Pacific Rim and paying attention to Chinese, Japanese, and Latin American voices, Markwyn offers new insight into the limitations to the exercise of American power abroad and implicitly challenges accounts of fairs that are overly comfortable within the safe historiographical confines of the nation-state."—Colin Fisher, Journal of American History
"The beautifully illustrated Empress San Francisco is much more than a social and cultural history of the PPIE; it will be of great interest to students and scholars in the fields of urban history, U.S. imperialism and foreign policy, women’s history, labor history, and the study of race, ethnicity, and nationality in Progressive-era America."—Bonnie M. Miller, Western Historical Quarterly
"This close study of a fleeting but significant event underscores the diversity, vitality, and complexity of not only a city on the cusp of the continent and the century, but also the foundation upon which it, and the nation itself, continues to wrestle with fundamental questions of the meaning of "America" and its place in the world today."—Sherry L. Smith, American Studies
"Markwyn's nuanced reading of many different historical and cultural "texts" under the umbrella of the 1915 World's Fair is a fine example of the author's scholarly alacrity and breadth of knowledge as well as the foundation of a well-told story."—Sarah J. Moore, Historian
"Empress San Francisco provides an impressive, little-known account of this important fair."—Charles Fracchia, Panorama
"This book offers a fresh consideration that focuses on the social and political climate of the Fair, and is essential to any study of early San Francisco in general and the PPIE in particular."—Midwest Book Review