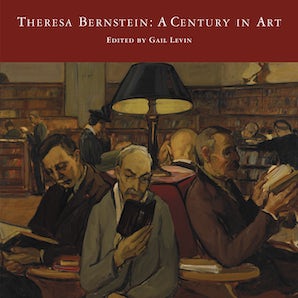 A Century in Art

The American artist Theresa Ferber Bernstein (1890–2002) made and exhibited her work in every decade of the twentieth century. This authoritative book about Bernstein provides an overview of her life and artistic career, examining her relationships with contemporary artists.

Bernstein’s work is noteworthy, even among her more famous male contemporaries such as John Sloan, Stuart Davis, and Edward Hopper, all of whom she knew. Working in realist and expressionist styles, she treated the major subjects of her time, including the fight for women’s suffrage, the plight of immigrants, World War I, jazz, unemployment, racial discrimination, and occasionally explicitly Jewish themes such as a synagogue interior or ritual objects such as a menorah. She was a member of the American Artists’ Congress and painted a mural for the U.S. government during the Great Depression.

Bernstein’s portrait subjects include Albert Einstein, Martha Graham, Judy Garland, Louis Armstrong, Lil Hardin, and Billie Holiday, yet it is her particular sensibility and empathy with those subjects that set her apart from her mostly male contemporaries.

Theresa Bernstein: A Century in Art includes thematic essays by Michele Cohen, Patricia M. Burnham, Elsie Heung, Sarah Archino, Stephanie Hackett, Gillian Pistell, and by the editor, Gail Levin. It features more than two hundred images, including full-color reproductions of her art and rare documentary photographs, many published here for the first time. It also includes a detailed chronology of Bernstein’s life, a list of public collections, and a list of her writings.

Gail Levin is Distinguished Professor of Art History, American Studies, and Women’s Studies at the Graduate Center and Baruch College of the City University of New York. She is the author of several books, including Lee Krasner: A Biography, Becoming Judy Chicago: A Biography of the Artist, and Edward Hopper: An Intimate Biography.

“Theresa Bernstein: A Century in Art is a major contribution to art history. Although there are exhibition catalogs of Theresa Bernstein’s work and her writings, there is no overview of her life and career, so this book is unique in viewing all the aspects of Bernstein’s artistic career and her biography, as well as her relationship with contemporary artists.”—Alicia Craig Faxon, professor of art history emerita at Simmons College and the author of Self-Portraits by Women Painters

“Gail Levin and her team of authors have assembled a fascinating account of the life and art of Theresa Bernstein, who came of age in the early years of the twentieth century and painted with a boldness of technique and feeling on a par with John Sloan and Stuart Davis. Indeed, she often surpassed them in terms of the praise showered on her when she exhibited in New York and Gloucester during the interwar years. Eclipsed at midcentury, as so many other women artists were, she is today recognized as a leading artist of the early twentieth-century urban scene.”—Patricia Hills, professor of art history at Boston University and the author of Painting Harlem Modern: The Art of Jacob Lawrence

“Based on extensive research, this important book illuminates the compelling life and work of American realist painter Theresa Bernstein. Bernstein’s career spans a century, from her early success in the vibrant New York art world of the 1910s to the diverse portraits, still lifes, landscapes, and prints she produced and exhibited until well past the age of one-hundred. This volume’s rich essays and illustrations restore Bernstein to the place she deserves in art history.”—Laura R. Prieto, professor of history and women’s and gender studies at Simmons College and author of At Home in the Studio: The Professionalization of Women Artists in America

"This book helps bring to life Theresa Bernstein, her life and her art. . . . Her work is impressive, especially compared to her peers at the time. . . . This book will help people appreciate her art more."—Kevin Winter, Portland Book Review
"Levin—who first encountered Bernstein's name while researching her book on Edward Hopper—has rendered an intriguing biography out of wonderful artwork and a provocative life story."—Arlene B. Soifer, Jewish Book Council

2. The Ashcan School? Theresa Bernstein and Her Vision of New York
Elsie Heung

4. Theresa Bernstein and the Era of World War I in New York
Sarah Archino

7. Documentary Still, a Portrait of a Relationship
Gillian Pistell

Theresa Bernstein: A Selection of Her Writings