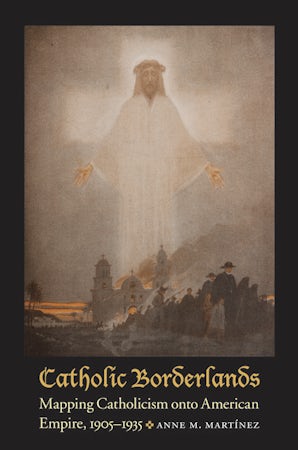 In 1905 Rev. Francis Clement Kelley founded the Catholic Church Extension Society of the United States of America. Drawing attention to the common link of religion, Kelley proclaimed the Extension Society’s duty to be that of preventing American Protestant missionaries, public school teachers, and others from separating people from their natural faith, Catholicism. Though domestic evangelization was its founding purpose, the Extension Society eventually expanded beyond the national border into Mexico in an attempt to solidify a hemispheric Catholic identity.

Exploring international, racial, and religious implications, Anne M. Martínez’s Catholic Borderlands examines Kelley’s life and actions, including events at the beginning of the twentieth century that prompted four exiled Mexican archbishops to seek refuge with the Archdiocese of Chicago and befriend Kelley. This relationship inspired Kelley to solidify a commitment to expanding Catholicism in Mexico, Puerto Rico, and the Philippines in response to the national plan of Protestantization, which was indiscreetly being labeled as “Americanization.” Kelley’s cause intensified as the violence of the Mexican Revolution and the Cristero Rebellion reverberated across national borders. Kelley’s work with the U.S. Catholic Church to intervene in Mexico helped transfer cultural ownership of Mexico from Spain to the United States, thus signaling that Catholics were considered not foreigners but heirs to the land of their Catholic forefathers.

Anne M. Martínez is in the Department of American Studies at the University of Groningen in the Netherlands.

"This is a well-researched book that I would recommend to anyone interested in the American Roman Catholic Church and its relationship with Hispanic Catholic communities (Mexico in particular)."—Michael P. Carroll, American Historical Review
"Anne Martínez's Catholic Borderlands is a skillfully written, meticulously researched, and engagingly diversified examination of what it meant to be a Catholic and an American from the perspective of Kelley. . . . It deserves a wide readership in postsecondary classes where students examine the concept of American political, social, cultural, and religious imperialism."—Matthew A. Redinger, Catholic Historical Review
"Future scholars of US empire, American religion, and American studies more broadly would do well do draw on the findings of this important work."—Katherine Moran, H-SHGAPE
"The clear writing, strong analytical framing, and global scope make Catholic Borderlands an excellent book for undergraduate and graduate classes."—Susan Fitzpatrick-Behrens, Hispanic American Historical Review
"Catholic Borderlands should be read by anyone teaching or doing research in American religious history."—Ann Swaner, Catholic Books Review
"By locating Catholics within a history of U.S. empire, Martínez asks readers to join her in the important work of considering the many and different global legacies of American Catholicism."—Kathleen Holscher, American Catholic Studies
"Martinez does not disappoint in exploring, explaining and answering where we have been."—Brian T. Olszewski, Pilot
"This study is especially insightful when it examines how Catholic institutions and leaders engaged in critical debates on race and empire. The emergence of a Latino majority within U.S. Catholicism and the growing significance of Latin America within the global Church give this history an added relevance."—Jamie M. Starling, Journal of American Ethnic History
"[Catholic Borderlands] is necessary reading for anyone interested in twentieth-century American history, religion, and postcolonial studies."—Luis D. León, New Mexico Historical Review
"Catholic Borderlands is an excellent book in which each chapter further develops subjects introduced in the previous chapter. Although the work revolves primarily around Kelley, Martínez does an extraordinary job of positioning his activities and rhetoric in broader historical themes."—Ana Martinez-Catsam, Catholic Historical Review