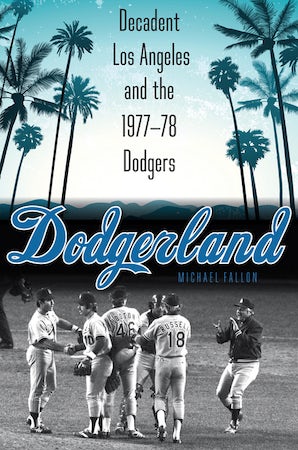 Decadent Los Angeles and the 1977–78 Dodgers

The 1977–78 Los Angeles Dodgers came close. Their tough lineup of young and ambitious players squared off with the New York Yankees in consecutive World Series. The Dodgers’ run was a long time in the making after years of struggle and featured many homegrown players who went on to noteworthy or Hall of Fame careers, including Don Sutton, Steve Garvey, Davey Lopes, and Steve Yeager. Dodgerland is the story of those memorable teams as Chavez Ravine began to change, baseball was about to enter a new era, and American culture experienced a shift to the “me” era.


Part journalism, part social history, and part straight sportswriting, Dodgerland is told through the lives of four men, each representing different aspects of this L.A. story. Tom Lasorda, the vocal manager of the Dodgers, gives an up-close view of the team’s struggles and triumphs; Tom Fallon, a suburban small-business owner, witnesses the Dodgers’ season and the changes to California's landscape—physical, social, political, and economic; Tom Wolfe, a chronicler of California’s ever-changing culture, views the events of 1977–78 from his Manhattan writer’s loft; and Tom Bradley, Los Angeles’s mayor and the region’s most dominant political figure of the time, gives a glimpse of the wider political, demographic, and economic forces that affected the state at the time.


The boys in blue drew baseball’s focus in those two seasons, but the intertwining narratives tell a larger story about California, late 1970s America, and great promise unrealized.

Michael Fallon is a writer on arts and culture and a nonprofit manager based in Minnesota. He is the author of Creating the Future: Art and Los Angeles in the 1970s.

"Not a conventional championship-season kind of treatment but a thoughtful, comprehensive, and even deeply personal account of a boisterous era whose echoes remain loud, even painful."—Kirkus
"Fallon gets the tone of the events just right—the boisterous energy and the deflation, the nervous highs and the depressive lows of Dodgerland and L.A."—Ron Slate, On the Seawall
"This book is recommended not only for baseball fans but also for readers who are interested in social history or who want to learn more about the culture of Los Angeles during that time."—Guy Who Reviews Sports Books
"Michael Fallon combines baseball, culture, politics, and social issues into a neat package in Dodgerland."—Bob D'Angelo, Sports Bookie
"Dodgerland is a fine baseball book. Fallon is a talented writer, who is able to effortlessly weave together a number of major storylines in order to make the enormous tapestry that this story is ultimately part of."—Baseball Historian
“Dodgerland is a fascinating study of American culture in Los Angeles in the 1970s. Among the characters marching across the pages are Tom Wolfe, Hugh Hefner, Charles Manson, Jim Bouton, Mayor Tom Bradley, Frank Zappa, and, of course, the men who bled Dodger blue, including imperfect heroes such as Steve Garvey, Don Sutton, Reggie Smith, and Glenn Burke. All came for the American Dream. Not all of them made it.”—Peter Golenbock, author of The Bronx Zoo and Bums: An Oral History of the Brooklyn Dodgers

“An intriguing, often audacious tale that weaves in such iconic characters as John Wayne and Bob Marley, Tom Wolfe and Tommy Lasorda. In the eye of this cultural hurricane, for a moment or two, stood the 1977–78 Los Angeles Dodgers. Here is their story—deftly told.”—Tim Wendel, author of Castro’s Curveball and Summer of ’68

“Michael Fallon has given us the California counterpart to The Bronx Is Burning, a sweeping yet intimate portrayal of the seventies’ denouement on the West Coast. Here’s the American Dream in Dodger blue, a black mayor, a pioneering journalist, and a hardworking hardware store owner.”—John Rosengren, award-winning author of The Fight of Their Lives: How Juan Marichal and John Roseboro Turned Baseball’s Ugliest Brawl into a Story of Forgiveness and Redemption

Prologue: Tuesday, October 17, 1978
Part 1. 1977
1. The Days of Bad Baseball
2. Where It Will Always Be 1955
3. Detours along the Dodger Way
4. Great Expectations, Everybody’s Watching You
5. The Land of Golden Dreams
6. We Were All Rookies Again
7. The Game Has Gotten Worse
8. But You Can Never Leave
9. Hollywood Stars and Blue Hard Hats
10. A John Wayne Kind of Adventure
11. Heroes and Villains
12. Dog Days in Dogtown
13. The Right Stuff
14. Gonna Fly Now
15. Klieg Lights, Smoke Bombs, and Three Massive Bombshells
Interlude: Postorbital Remorse; or, There’s Always Next Year
Part 2. 1978
16. Rediscovering Baseball
17. Paradise Defiled
18. The Redemption of Rick Monday
19. Every Day We Pay the Price
20. The Ballad of Glenn and Spunky
21. Ain’t Talkin’ ’bout Love
22. Untaxing the Golden Cow
23. Nothing Is Clicking Right Now
24. The Grapple in the Apple
25. Is the Force with Us?
26. Clinching
27. The Inevitable Yankee Miracle
28. Chronic Hysteresis; or, Another Yankees-Dodgers Rematch
Afterword: Leaving Babylon
Notes
Index