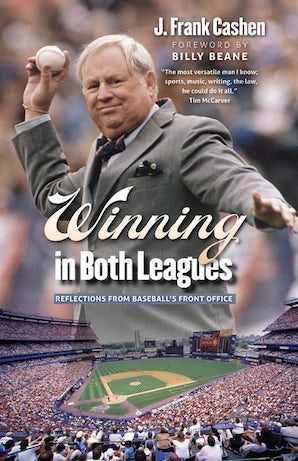 In Winning in Both Leagues J. Frank Cashen looks back over his twenty-five-year career in baseball. Best known as the general manager of the New York Mets during their remaking and rise to glory in the 1980s, Cashen fills the pages with lively stories from his baseball tenure during the last half of the twentieth century. His career included a stint with the Baltimore Orioles of the late ’60s and ’70s, working with manager Earl Weaver and the great teams of the early ’70s, including such players as Jim Palmer, Frank Robinson, and Brooks Robinson. Later, tapped by Mets owner Nelson Doubleday Jr. to bring the Mets to the pinnacle of Major League Baseball, Cashen, with the rise of superstars Darryl Strawberry and Dwight Gooden, led the Mets to the thrilling come-from-behind victory over the Boston Red Sox leading to the World Series championship in 1986.

Winning in Both Leagues also chronicles the drafting of Billy Beane, who would later be the focus of the New York Times bestseller Moneyball. Cashen, who was a central figure in the fierce competition with New York Yankees owner George Steinbrenner, excelled at building winning ball clubs and remains one of only two general managers ever to win a World Series in both leagues.

J. Frank Cashen was, at various times, executive vice president, chief operating officer, and general manager of the Baltimore Orioles in the ’60s and ’70s and the New York Mets from 1980 to 1991. His teams won three world championships in five World Series appearances and were runners up in three other league championship playoffs. He passed away on June 30, 2014.

Billy Beane is the executive vice president of baseball operations for the Oakland Athletics.

“The most versatile man I know; sports, music, writing, the law, he could do it all.”—Tim McCarver
“When it came to baseball, Cashen had the magic touch.”—Nelson Doubleday Jr., former president of Doubleday and former owner of the New York Mets
“Frank Cashen, through shrewd trades and organizational development, put together two of the most complete pitching staffs in baseball history. Through the use of both the numbers and his great appreciation of the eyes and ears of the game (the scouts), Mr. Cashen assembled iconic franchises. Orioles and Mets fans applaud.”—Ron Darling, New York Mets pitcher in the 1980s
“Frank Cashen liked being a sportswriter, liked being a lawyer, liked running a brewery, but loved being a baseball general manager. He took his intellect, people skills, great judgment, and passion and became one of the best baseball GMs ever.”—Jim Palmer, broadcaster and Baltimore Orioles Hall of Fame pitcher
“Cashen is a hero to the little people in baseball. He believed in scouting and the Minor Leagues and persuaded the big league owners to provide a retirement plan for the forgotten people of baseball.”—Harry Minor, long-time New York Mets scout
"[Winning in Both Leagues] delivers a refreshingly compact and unpretentious change of pace."—Henry D. Fetter, Wall Street Journal

"Whether you've heard the stories before, or whether some of the information is totally new, Cashen's is a good read."—Pete Kerzel, Mid Atlantic Sports Network