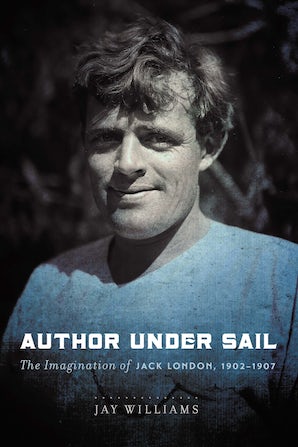 In Author Under Sail: The Imagination of Jack London, 1902–1907, Jay Williams explores Jack London’s necessity to illustrate the inner workings of his vast imagination. In this second installment of a three-volume biography, Williams captures the life of a great writer expressed though his many creative works, such as The Call of the Wild and White Fang, as well as his first autobiographical memoir, The Road, some of his most significant contributions to the socialist cause, and notable uncompleted works. During this time, London became one of the most famous authors in America, perhaps even the author with the highest earnings, as he prepared to become an equally famous international writer.

Author Under Sail documents London’s life in both a biographical and writerly fashion, depicting the importance of his writing experiences as his career followed a trajectory similar to America’s from 1876 to 1916. The underground forces of London’s narratives were shaped by a changing capitalist society, media outlets, racial issues, increases in women’s rights, and advancements in national power. Williams factors in these elements while exploring London’s deeply conflicted relationship with his own authorial inner life. In London’s work, the imagination is figured as a ghost or as a ghostlike presence, and the author’s personas, who form a dense population among his characters, are portrayed as haunted or troubled in some way.

Along with examining the functions and works of London’s exhaustive imagination, Williams takes a critical look at London’s ability to tell his stories to wide arrays of audiences, stitching incidents together into coherent wholes so they became part of a raconteur’s repertoire. Author Under Sail provides a multidimensional examination of the life of a crucial American storyteller and essayist.

Jay Williams is the senior managing editor (ret.) of Critical Inquiry. He is the author of Author Under Sail: The Imagination of Jack London, 1893–1902 (Nebraska, 2014), editor of Signature Derrida and The Oxford Handbook of Jack London, and general editor of the forthcoming thirty-volume complete works of Jack London.

"Author under Sail presents a new direction in London biography for the 21st century. When complete, it promises to become the standard reference work on London for generations to come."—S. M. Nuernberg, Choice
“Author Under Sail is an audacious departure from the well-worn critical trails routinely trod by scholars who have tended to analyze Jack London’s life and work through the conventional academic rubrics of literary realism and naturalism. Williams has tracked down crucial new dimensions of Jack London’s life and artistry that—amazingly—have gone virtually undetected by previous biographers and critics. Williams provides an engaging portrait of the writer confronting the ghosts, ogres, and monsters of his psyche and makes a convincing case that this struggle was the catalytic crux and pivotal adventure of Jack London’s creative life. Author Under Sail is nothing short of a bio-critical El Dorado for London studies.”—Kenneth K. Brandt, executive coordinator of the Jack London Society
“Author Under Sail is the London biography I have been hoping for. It is transformative, a game changer. Williams puts the lie to London’s assertion that he wrote only to support his adventures. He demonstrates, in an engaging and deeply considered account, that London was entirely committed to his craft. For anyone seeking to know London first and foremost as a writer, this volume, together with the first installment, is the biography to read.”—Sara S. “Sue” Hodson, retired curator of literary manuscripts at the Huntington Library and coauthor of Jack London, Photographer
“This new volume, as with Jay Williams’s previous engrossing installment, greatly enlarges our understanding of Jack London—the man, his work, and his times.”—Paul Theroux, author of On the Plain of Snakes: A Mexican Journey
“In this second volume of Author Under Sail, Jay Williams continues to train his telescope on Jack London’s authorial ship. With insight, humor, and a breadth of knowledge, Williams bores into London’s creativity and business acumen during a heyday of America’s literary landscape. This book, along with the first volume, is a must for students and scholars of London and anyone with an interest in exploring the intimate, inner workings of a best-selling author.”—Aleta George, author of Ina Coolbrith: The Bittersweet Song of California’s First Poet Laureate

Introduction
Chapter 1: Howl, O Heav’nly Muse
Chapter 2: Jesus in the Theater of Socialism
Chapter 3: Jack London’s Place in American Literature
Chapter 4: Theater of War, Theater at Home
Chapter 5: Revolution, Evolution, and the Scene of Writing
Chapter 6: The Jack London Show Goes on the Road
Chapter 7: Red Atavisms and Revolution
Chapter 8: Earthquake Apocalypse and Building the City, Boat, and House Beautiful
Chapter 9: The Future of Socialism and the Death of the Individual
Chapter 10: The Road Never Ends