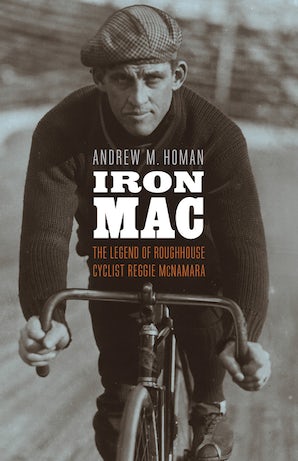 At a time when cycling in the United States rivaled baseball as the nation’s most popular professional sport, along came Reggie McNamara, a farmer’s son from Australia. Within a month of his arrival in the United States in 1913, he had earned the moniker “Iron Man” for his high tolerance of pain and his remarkable ability to recover from seemingly catastrophic injury. The nickname proved justified. Not only was he tough, he was also one of the best and highest-paid athletes in the world.

During his thirty-year career, McNamara won seventeen punishing six-day races along with an inestimable number of shorter distance races, including high-profile events on three different continents, peaking in 1926–27 at the age of thirty-nine. The fans, media, and his fellow professionals all idolized him as an example of the true grit needed to succeed in this grueling and dangerous sport. Late in his career, however, hard drinking and injuries took their toll, and McNamara became estranged from his wife and children. He fought back just as he always had on the race course, conquering his addiction to alcohol and becoming one of the earliest success stories of Alcoholics Anonymous.

In this humorous and exciting biography of the original Iron Man, Andrew M. Homan pulls McNamara back into the spotlight, depicting a flawed but beloved man whose success in those unrelenting six-day races came at a price.

Andrew M. Homan is the author of Life in the Slipstream: The Legend of Bobby Walthour Sr. (Potomac Books, 2011). His writing has appeared in several cycling magazines, including Cycle Sport, Peloton, Ride Cycling Review, Road Bike Action, and VeloNews.

"Popular memory overlooks the reality that six day bicycle racing and Australian born Reggie McNamara needs to be included in any top sports list. . . . Andrew Homan has done a good job bringing both to the fore with his biography of Iron Mac."—Duncan R. Jamieson, Sport Literature Association
In Iron Mac, Andrew M. Homan successfully describes the life of one of America's forgotten sporting stars, Reggie McNamara. . . . The amount of previously unpublished work and Homan's valuable endnotes make this work worth reading for any historian of bicycle racing, especially North American racing. . . . Homan’s writing style and organization are fluid; the book is a delight to read. Thanks to Homan, the legend of Iron Mac lives on gloriously."—Ari de Wilde, Journal of Sport History
“The story of Reggie ‘Iron Man’ McNamara is a fascinating one of not only the racer but of the history of six-day racing. Delving into Iron Man’s career, Andrew Homan also unravels some of the history of cycling politics. Tales of riders’ strikes, collusion, spectator hooliganism, and life bans will resonate in modern cycling. This story is the legacy of a hero of cycling.”—Phil Anderson, first Australian (and first non-European) to wear the Tour de France’s yellow jersey (1981)

“This book brings back not only the story of one of the greatest stars, but also leaves you with a sense of the atmosphere surrounding the sport and of all the characters involved.”—George Mount, first American to compete in the Giro d’Italia (1981), winner of the Red Zinger Classic (1978), and current vice president of the U.S. Bicycling Hall of Fame
“In my years of racing professionally in the United States, cycling has been a fringe sport. Iron Mac tells of a time when it wasn’t. This story about a hero who’s easy to cheer for is refreshing and hopeful for those of us who love cycling today.”—Phil Gaimon, professional cyclist for Cannondale-Garmin and author of Pro Cycling on $10 a Day 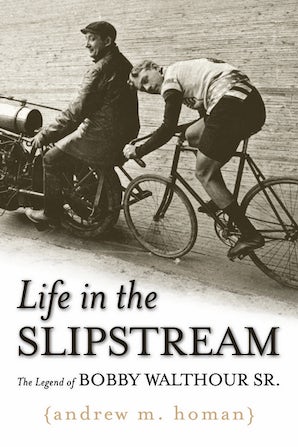 Life in the Slipstream