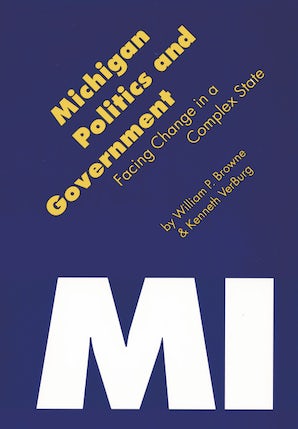 Facing Change in a Complex State

Michigan, like most of the states formed from the old Northwest, originated as a state of farmers, fishermen, and lumbermen and remained so until Detroit emerged as a major industrial center at the turn of the twentieth century. The growth of the automotive industry attracted new immigrants and new politics. Republican for most of its history, Michigan became a bipartisan state with political divisions: upper versus lower peninsula, agriculture versus industry, labor versus capital, developers versus ecologists, and conflicts between races.
Lansing and its lobbyists and political action committees exemplify modern large-state politics. With double-digit unemployment and an enormous stake in cars, roads, and bridges, Michigan is acutely aware of its ties to the federal government. Two governors, G. Mennen Williams and George Romney, have contended for the presidency, and one representative, Gerald Ford, became president by legislative maneuver. A strong governorship, an independent and experienced bureaucracy, and a full-time legislature have created an activist, policy-directed state government that generally bears little resemblance to the laissez-faire leadership of Michigan’s early years.
Although this book provides much historical and geographical information, the primary focus remains Michigan’s need to cope with its vacillating economy. The authors look at the state’s regional, ethnic, racial, and socioeconomic diversity and show how these are affected by the forces of change.

William P. Browne is a professor of political science at Central Michigan University. He is author of Private Interests, Public Policy, and American Agriculture. Kenneth VerBurg is a professor in the Department of Resource Development at Michigan State University. He serves as chairperson of the State Boundary Commission and is coauthor with Charles Press of American Politicians and Journalists and coauthor of the award-winning Sacred Cows and Hot Potatoes: Agrarian Myths in Agriculture Policy.