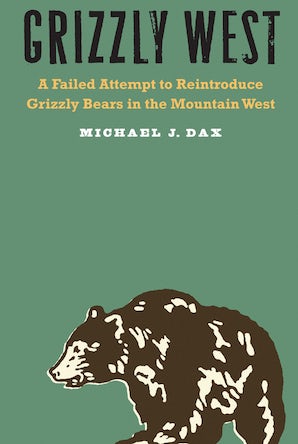 A Failed Attempt to Reintroduce Grizzly Bears in the Mountain West

Environmentalists and the timber industry do not often collaborate, but in the years immediately following gray wolf reintroduction in the interior American West, a plan to reintroduce grizzly bears to the Selway-Bitterroot Wilderness of Idaho and Montana brought these odd bedfellows together. The partnership won praise from diverse interests across the country and in 2000 the U.S. Fish and Wildlife Service approved a plan for reintroduction. When the Bush Administration took office, however, it promptly shelved the project.

In Grizzly West Michael J. Dax explores the political, cultural, and social forces at work in the West and around the country that gave rise to this innovative plan but also contributed to its downfall. Observers at the time blamed the project’s collapse on simple partisan politics, but Dax reveals how the American West’s changing culture and economy over the second half of the twentieth century dramatically affected this bold vision. He examines the growth of the New West’s political potency, while at the same time revealing the ways in which the Old West still holds a significant grip over the region’s politics. Grizzly West explores the great divide between the Old and the New West, one that has lasting consequences for the modern West and for our country's relationship with its wildlife.

"Grizzly West is an excellent environmental history that puts the story of grizzlies in the West in their biological, human and politic context."—Erin H. Turner, Big Sky Journal
"A fascinating look at just how complicated issues of wildlife and conservation are out here, as well as the grip in which the West is held by its own mythology, Grizzly West makes clear that it’s very hard for a bear, or a wolf, or a river to just be what they are when politics, history and human nature are involved."—Lit/Rant
"Grizzly West is a timely retrospective of biopolitics surrounding conservation of large carnivores in the western US."—J. Organ, CHOICE
"Grizzly West is a good book. . . . Dax resurrects a missing and important story and uses it to illustrate critical trends in modern western history."—Adam Sowards, Annals of Wyoming
"Incredibly informative."—Douglas M. Richardson, Mountain Research and Development
"A timely read."—Scott Parker, Bozeman Daily Chronicle
"Of primary interest to environmental historians and historians of western politics, Dax’s detailed description of a decade’s worth of political maneuvering is greatly augmented by his access to previously unknown personal documents and interviews with the principals involved."—Mark Madison, Western Historical Quarterly
"Grizzly West should be recommended reading for anyone interested in the environmental and political history of the American West."—Peter S. Alagona, Environmental History
"Grizzly West is a wellspring of insight regarding the political dimensions of species restoration in the 1990s and will be of value to both academic and general readers with an interest in recent issues in western environmentalism."—Kelsey Matson, Pacific Northwest Quarterly
"Dax is a skilled writer who keeps the narrative moving. Throughout, he constantly juxtaposes the world views of the New West and Old West and how these strongly held beliefs influenced the development of the reintroduction plan."—David J. Robertson, Natural Areas Journal

“Idaho’s Selway-Bitterroot Wilderness together with the Frank Church Wilderness constitute the largest roadless area in the Lower 48. All this land is prime and historical grizzly bear habitat. Yet, despite nearby grizzly populations in Montana, this vast region is tragically and bafflingly devoid of grizzly bears. How could this be? Michael Dax’s unusually thorough book documents our public failure to reintroduce the great bear to its natural home.”—Doug Peacock, author of Grizzly Years and In the Shadow of the Sabertooth

“Michael Dax expertly probes the economic, cultural, and political divides spawned by recent efforts to reintroduce grizzly bears into the Bitterroot Range. . . . This is a first-rate environmental history that will enlighten environmentalists, legislators, natural resource users, and others engaged in deciding the fate of public lands in the modern American West.”—Mark Harvey, author of Wilderness Forever: Howard Zahniser and the Path to the Wilderness Act

“Michael Dax delivers a nuanced and compelling study of the interconnectedness of politics and the environment in the West. He ably tells a story that far too few know, and he does so with grace and clarity and skillfully avoids green-washing this topic.”—Sara Dant, professor of history at Weber State University and coauthor of the Encyclopedia of American National Parks