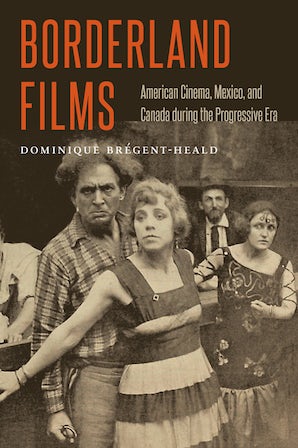 American Cinema, Mexico, and Canada during the Progressive Era

The concept of North American borderlands in the cultural imagination fluctuated greatly during the Progressive Era as it was affected by similarly changing concepts of identity and geopolitical issues influenced by the Mexican Revolution and the First World War. Such shifts became especially evident in films set along the Mexican and Canadian borders as filmmakers explored how these changes simultaneously represented and influenced views of society at large.

Borderland Films examines the intersection of North American borderlands and culture as portrayed through early twentieth-century cinema. Drawing on hundreds of films, Dominique Brégent-Heald investigates the significance of national borders; the ever-changing concepts of race, gender, and enforced boundaries; the racialized ideas of criminality that painted the borderlands as unsafe and in need of control; and the wars that showed how international conflict significantly influenced the United States’ relations with its immediate neighbors. Borderland Films provides a fresh perspective on American cinematic, cultural, and political history and on how cinema contributed to the establishment of societal narratives in the early twentieth century.

Dominique Brégent-Heald is an associate professor of history at Memorial University of Newfoundland. Her articles have appeared in Frontiers: A Journal of Women Studies, American Review of Canadian Studies, Western Historical Quarterly, Journal of the Canadian Historical Association, and Journal of American Culture.

"Borderland Films is a clearly written and well-argued exploration of the impact of cinema on North American international relations. This sprawling and ambitious archive of hundreds of borderland films is a much-needed corrective to border studies in the American hemisphere and a model of global and comparative border studies. It will no doubt become a key text of the field."—Camilla Fojas, Western American Literature
"Original, incisive, and written in a clear and accessible style, Borderland Films delves into an area that has received too little attention."—G. A. Foster, Choice
"Borderland Films is an ambitious and impressive work of cultural history."—Desirée J. Garcia, Journal of American History
"This well-written and engaging book sheds light on a crucial period of film history through its scrutiny of an understudied genre. . . . While valuable to scholars across fields and disciplines, Borderland Films also has great potential in the classroom; it shows film both as a primary source to understand broader trends and as a key feature of Progressive Era culture and society."—Nicolas G. Rosenthal, Western Historical Quarterly
"The book’s cogent cultural analysis and hemispheric perspective greatly enrich the fields of borderland studies, film studies, cultural imperialism, and U.S. expansionism."—Pennee Bender, American Historical Review
“Brégent-Heald develops a long overdue and much needed comparative perspective on the twentieth-century history of films about the U.S. borders with Mexico and Canada. As it challenges notions of national and regional exceptionalism, Borderland Films is essential reading for anyone interested in border studies, North American history, scholarship on the Canada-U.S. border, hemispheric American studies, and film studies.”—Claudia Sadowski-Smith, author of Border Fictions: Globalization, Empire, and Writing at the Boundaries of the United States
“This beautifully written, interdisciplinary analysis combines cutting-edge borderlands scholarship with a close analysis of a unique genre in the late Progressive Era American film industry. It examines the many ways that films about the northern and southern edges of the United States portrayed and explained racial tensions. It is an important and welcome addition to North American borderlands historiography.”—Sheila McManus, author of The Line Which Separates: Race, Gender, and the Making of the Alberta-Montana Borderlands

“In Borderland Films, Dominique Brégent-Heald analyzes a stunning array of movies—from the familiar to the forgotten—produced during the industry’s early years and set along the boundaries between the United States and its northern and southern neighbors, with particular attention to overlapping and diverging portrayals of race, gender, citizenship, and nation. Carefully argued and lucidly written, this is essential reading for those engaged in the telling of a truly continental history of North America.”—Andrew Graybill, author of Policing the Great Plains: Rangers, Mounties, and the North American Frontier, 1875–1910