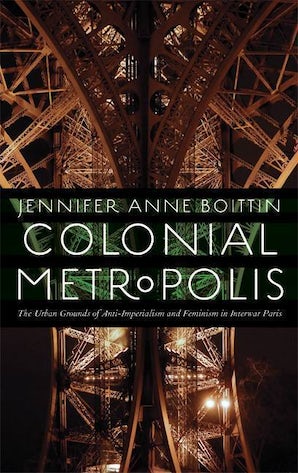 The Urban Grounds of Anti-Imperialism and Feminism in Interwar Paris

World War I gave colonial migrants and French women unprecedented access to the workplaces and nightlife of Paris. After the war they were expected to return without protest to their homes—either overseas or metropolitan. Neither group, however, was willing to be discarded.
Between the world wars, the mesmerizing capital of France’s colonial empire attracted denizens from Africa, the Caribbean, and the United States. Paris became not merely their home but also a site for political engagement. Colonial Metropolis tells the story of the interactions and connections of these black colonial migrants and white feminists in the social, cultural, and political world of interwar Paris. It explores why and how both were denied certain rights, such as the vote, how they suffered from sensationalist depictions in popular culture, and how they pursued parity in ways that were often interpreted as politically subversive.

“The excellent analysis of race and gender is a noteworthy strength of this book. . . . Highly readable.”—Jeffrey H. Jackson, American Historical Review
“Methodologically innovative and skillfully researched, Colonial Metropolis supports the author’s contention that the grand European city itself had become colonized. In demonstrating the profoundly complex, intertwined, and shifting roles that gender and race played in this colonization, Boittin’s work recasts our understanding of the metropole and its place in the empire during this period.”—Carolyn J. Eichner, French Politics, Culture, and Society
"Examining performers such as Josephine Baker, black and feminist print culture, and police records about anti-imperial activists, the author connects diverse threads regarding race, gender, and colonialism."—Choice
"Jennifer Anne Boittin's Colonial Metropolis represents a bold assertion of the centrality of colonial relationships to the political and cultural history of interwar Paris."—Ian Germani, H-Urban
"[Colonial Metropolis] offers insightful and original analysis of the links between the vogue nègre and anti-imperial politics, and of the important role of the city of Paris in facilitating such a nexus."—Kate Marsh, H-France Review
"Colonial Metropolis should be required reading for any scholars of French empire in the twentieth century, as well as for graduate students working on twentieth century European imperialism. This book is consciously in dialogue with the richer literature on gender and race in the British Empire, so its value goes beyond specialists of France."—Jeremy Rich, Itinerario

2. Dancing Dissidents and Dissident Dancers: The Urban Topography of Race

3. A Black Colony? Race and the Origins of Anti-Imperialism

4. Reverse Exoticism and Masculinity: The Cultural Politics of Race Relations

5. In Black and White: Women, La Dépêche Africaine and the Print Culture of the Diaspora

6. “These Men’s Minor Transgressions:” White Frenchwomen on Colonialism and Feminism

Edited and with an introduction by Jane E. Goodman and Paul A. Silverstein