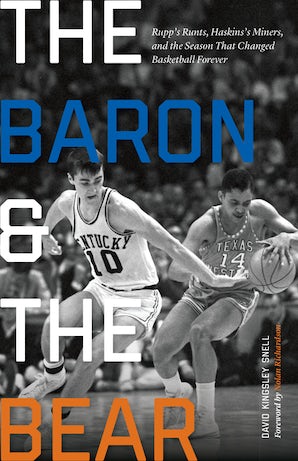 In the 1966 NCAA basketball championship game, an all-white University of Kentucky team was beaten by a team from Texas Western College (now UTEP) that fielded only black players. The game, played in the middle of the racially turbulent 1960s—part David and Goliath in short pants, part emancipation proclamation of college basketball—helped destroy stereotypes about black athletes.

Filled with revealing anecdotes, The Baron and the Bear is the story of two intensely passionate coaches and the teams they led through the ups and downs of a college basketball season. In the twilight of his legendary career, Kentucky’s Adolph Rupp (“The Baron of the Bluegrass”) was seeking his fifth NCAA championship. Texas Western’s Don Haskins (“The Bear” to his players) had been coaching at a small West Texas high school just five years before the championship.

After this history-making game, conventional wisdom that black players lacked the discipline to win without a white player to lead began to dissolve. Northern schools began to abandon unwritten quotas limiting the number of blacks on the court at one time. Southern schools, where athletics had always been a whites-only activity, began a gradual move toward integration.

David Kingsley Snell brings the season to life, offering fresh insights on the teams, the coaches, and the impact of the game on race relations in America.

David Kingsley Snell was a correspondent for ABC News covering everything from the Vietnam War to presidential campaigns to Apollo lunar missions. He is the author of Mike Fright: How to Succeed in Media Interviews When Mike Wallace Comes Calling. Nolan Richardson played for Texas Western under Don Haskins from 1961 to 1963. The first African American coach at a major southern university, he had a Hall of Fame coaching career at the University of Arkansas from 1985 to 2002 and led the Razorbacks to a national championship in 1994.

“The Baron and the Bear answers the question, ‘What was Adolph Rupp really like?’ It captures Rupp and Rupp’s Runts as never before. It also demolishes the contention that Rupp was a racist. It’s about time.”—Coach Joe B. Hall, Rupp’s assistant and successor at the University of Kentucky, winner of the NCAA basketball championship in 1978
“My grandmother used to say, if you want to change the world, wait for a door to open a crack and then kick it down. The Baron and the Bear challenges conventional wisdom about coaches Adolph Rupp and Don Haskins and gives a good strong kick to a door that needed kicking.”—Nolan Richardson, Hall of Fame basketball coach for the University of Arkansas, winner of the NCAA championship in 1994
“As David Snell makes clear, Texas Western’s historic win over Kentucky was both polarizing and transforming. It forced people to confront their stereotypes and biases, accelerating the momentum of the civil rights movement.”—Peter Dreier, professor of political science at Occidental College and author of The One Hundred Greatest Americans of the Twentieth Century: A Social Justice Hall of Fame