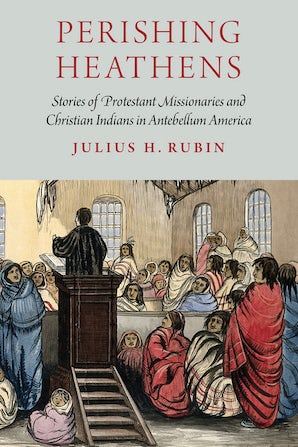 Stories of Protestant Missionaries and Christian Indians in Antebellum America

In Perishing Heathens Julius H. Rubin tells the stories of missionary men and women who between 1800 and 1830 responded to the call to save Native peoples through missions, especially the Osages in the Arkansas Territory, Cherokees in Tennessee and Georgia, and Ojibwe peoples in the Michigan Territory. Rubin also recounts the lives of Native converts, many of whom were from mixed-blood métis families and were attracted to the benefits of education, literacy, and conversion.

During the Second Great Awakening, Protestant denominations embraced a complex set of values, ideas, and institutions known as “the missionary spirit.” These missionaries fervently believed they would build the kingdom of God in America by converting Native Americans in the Trans-Appalachian and Trans-Mississippi West. Perishing Heathens explores the theology and institutions that characterized the missionary spirit and the early missions such as the Union Mission to the Osages, and the Brainerd Mission to the Cherokees, and the Moravian Springplace Mission to the Cherokees.

Through a magnificent array of primary sources, Perishing Heathens reconstructs the millennial ideals of fervent true believers as they confronted a host of impediments to success: endemic malaria and infectious illness, Native resistance to the gospel message, and intertribal warfare in the context of the removal of eastern tribes to the Indian frontier.

Julius H. Rubin is a professor emeritus of sociology at the University of Saint Joseph. He is the author of Tears of Repentance: Christian Indian Identity and Community in Colonial Southern New England (Nebraska, 2013), The Other Side of Joy: Religious Melancholy among the Bruderhof, and Religious Melancholy and Protestant Experience in America.

“This book is built on an incredible range of sources, and Rubin’s theoretical treatment of conversion is both welcome and excellently done. A must read for those interested in the religious dimensions of Indian politics in the early nineteenth century.”—A. R. McKee, Choice
“Rubin has successfully captured the image of a nation forged by widespread evangelical peoplehood in nineteenth-century America that titillates the reader's intellectual and emotional sides. Bolstering his career-long work as a religious and cultural scholar, Rubin engages readers in an expertly crafted interdisciplinary work that appeals to scholars, students, and the eager novice interested in religion, history, and sociology.”—Kara Jo Wilson, Chronicles of Oklahoma
"In Perishing Heathens: Stories of Protestant Missionaries and Christian Indians in Antebellum America Julius Rubin holds a magnifying glass up to the lives of early settler evangelicals and Native American converts. As a historical sociologist, Rubin explores individuals, both Native and non-native, many of whom are underrepresented in the historical record."—Rachel R. Luckenbill, Transmotion
"Rubin provides a clear account of antebellum evangelical Protestant culture that demanded the salvation of the "perishing heathens.""—Linda M. Clemmons, Church History
"Perishing Heathens is most successful as a study of missionary culture."—Sarah Koenig, Journal of Southern History
"Utilizing powerful storytelling, Julius Rubin tells the story of Christian Protestant missionaries and those they sought to convert among Native Americans. . . . As Rubin explores the relationship between native peoples and those who sought to convert them, he shows that issues of fear and power were at play, as the United States seized land and control and missionaries demonstrated a lack of theological understanding of the purpose of their work."—Teer Hardy, Reading Religion
"The rich portraits of converts and missionaries that Perishing Heathens paints will be of interest not only to any reader seeking to understand the missionary spirit of nineteenth-century America, but also to those trying to understand the new Protestant religiosity. As most of the missionaries had ties to Connecticut, readers get a vivid image of its fervent and proselytizing religious climate during the Second Great Awakening."—Nathan Bryant Braccio, Connecticut History Review
"Rubin has written one of the most emotionally sensitive and psychologically insightful examinations of the individual Christians who were members—or the indigenous first fruits—of antebellum missions to Native Americans."—Joshua M. Rice, Fides et Historia
“Perishing Heathens breaks ground in American religious and cultural history and in postcolonial studies.  Rubin’s dual focus on missionaries and Christianized Indians of the early republic reconsiders the impact of evangelical Protestantism on individuals—Native, mixed, or white—and recasts the old binaries between indigenous and settler, colonized and colonizers.”—Jennifer Snead, associate professor of English at Texas Tech University and editor of The Eighteenth Century: Theory and Interpretation

“I found this book to be a valuable source on this important period and a thought-provoking treatment of this very challenging subject.”—Kathleen Bragdon, author of The Columbia Guide to American Indians of the Northeast

1. The Travails of David Bacon: “A Humble Missionary of the Cross”

2. The Missionary Vocation of Miss D: A Life Broken by Disease and Disappointment

3. The Endless Chain of Religious Intelligence: The Emergence of an American Evangelical Identity

4. The Question of K: “The First Friend of the Osage Nation unto God”

5. The First Fruits of the Cherokee Nation: Catharine Brown and Sister Margaret Ann 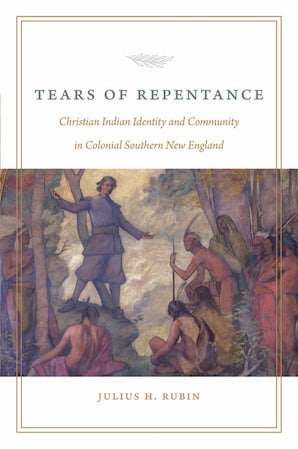